Welcome to Sherwood Forest! Join a gang of bandits to trap King John's loot wagons to make a good impression on the infamous Robin Hood! 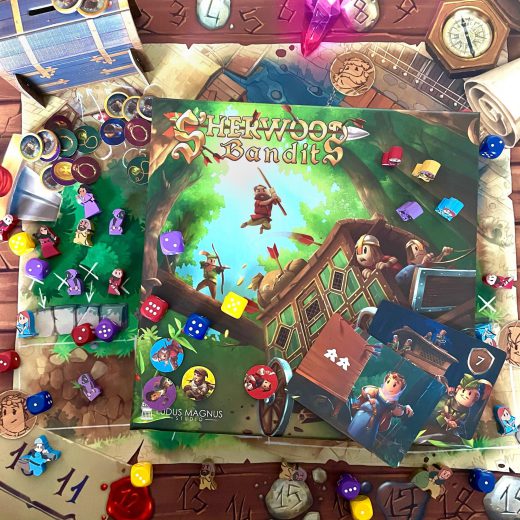 Welcome to Sherwood Forest! Together with a gang of bandits, you lure King John's loot wagons into a trap to make a good impression on the infamous Robin Hood. But watch out, there are other gangs lurking in the woods. Of course they also want to impress Robin. Can you collect the most valuable loot? What are you waiting for? Gather your gang because you can already hear the first wagons coming!

First of all, at the start of each turn, loot wagons are placed face down on the designated positions. There are as many loot wagons as the number of players. Each loot wagon has numbers on the face down side. This is the range of the defense. Does it say 4-9? Then the defense of the money car can be between 4 and 9. So you won't know yet how many defense points the money car will actually have!

Game turns are then divided into 3 phases in Sherwood Bandits.

The day begins and the bandits get ready to choose the best attack position.

Positioning: In this phase, you take turns positioning one of your 4 bandits in an attack position of your choice. After a player has placed a bandit, the next player may place a bandit. You repeat this until you run out.

Reveal wagons: When everyone has placed their bandits, the loot wagons are turned over. So now you can see how many defense points the wagon really has.

It's time to attack! Every bandit is now given the opportunity to show his worth by working or interfering with others.

Attack: The starting player starts by choosing a loot wagon to attack first. Then the player of the leftmost bandit starts rolling the dice. This is the attack value of that bandit. You place the die in front of your bandit. Then other players do the same for the other bandits from left to right.

Attack result: The goal is to achieve at least the defense value of the money car in attack points with the 4 bandits. When all dice are placed they are added together from left to right until the defense value is reached or passed. All other dice (and therefore bandits) are not needed for the attack and are discarded. So it is safer to place your bandits on the left positions. If you don't reach the defense value, the attack has failed and the loot wagon will be able to escape.

Loot: Unfortunately, for putting down your bandits safely (left) you also get less loot. You get a victory point for each bandit who takes part in an attack, but the rightmost bandit gets 2 victory points! The loot wagon has random loot tokens equal to the number of bandits that participated in the attack. The player of the rightmost bandit may choose first from these loot tokens, followed by the players to the left of this bandit. So you see that it is risky to put your bandit more to the right, but that this will give you the most loot! 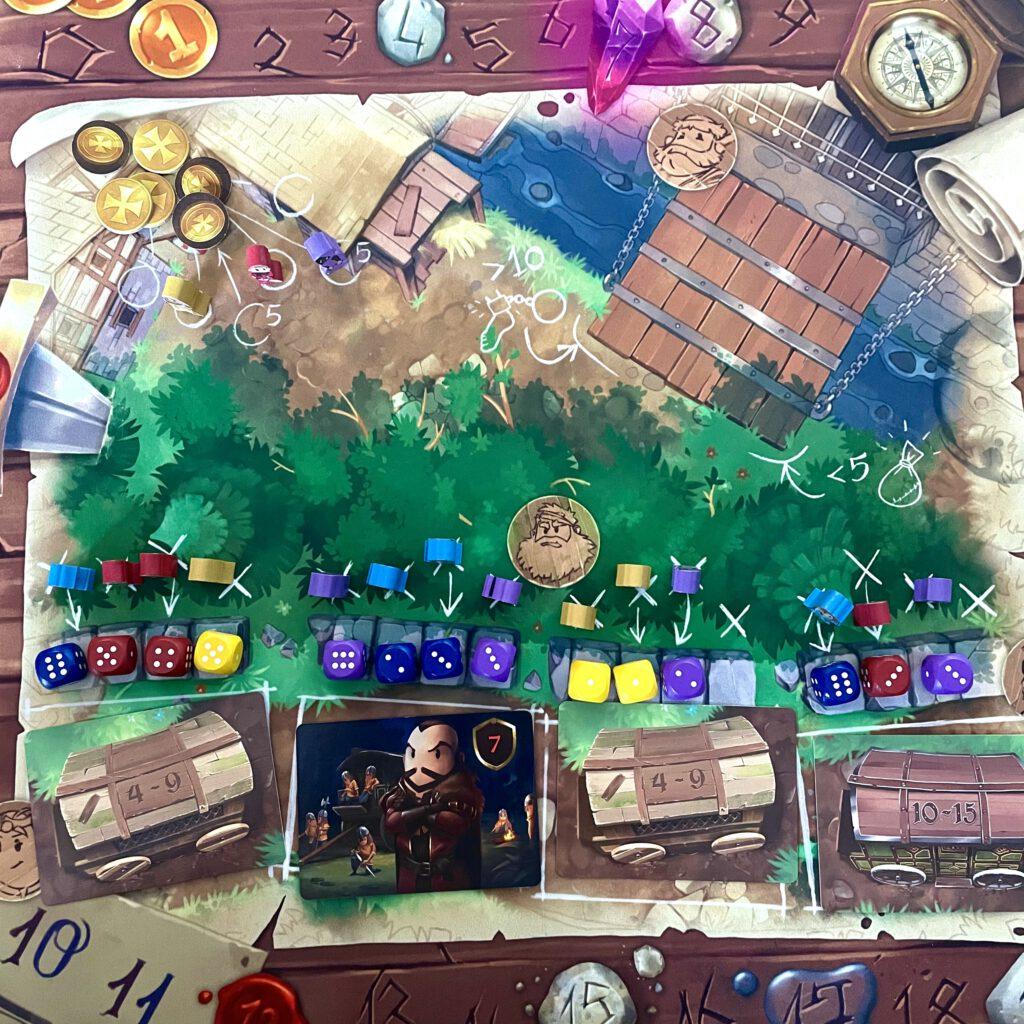 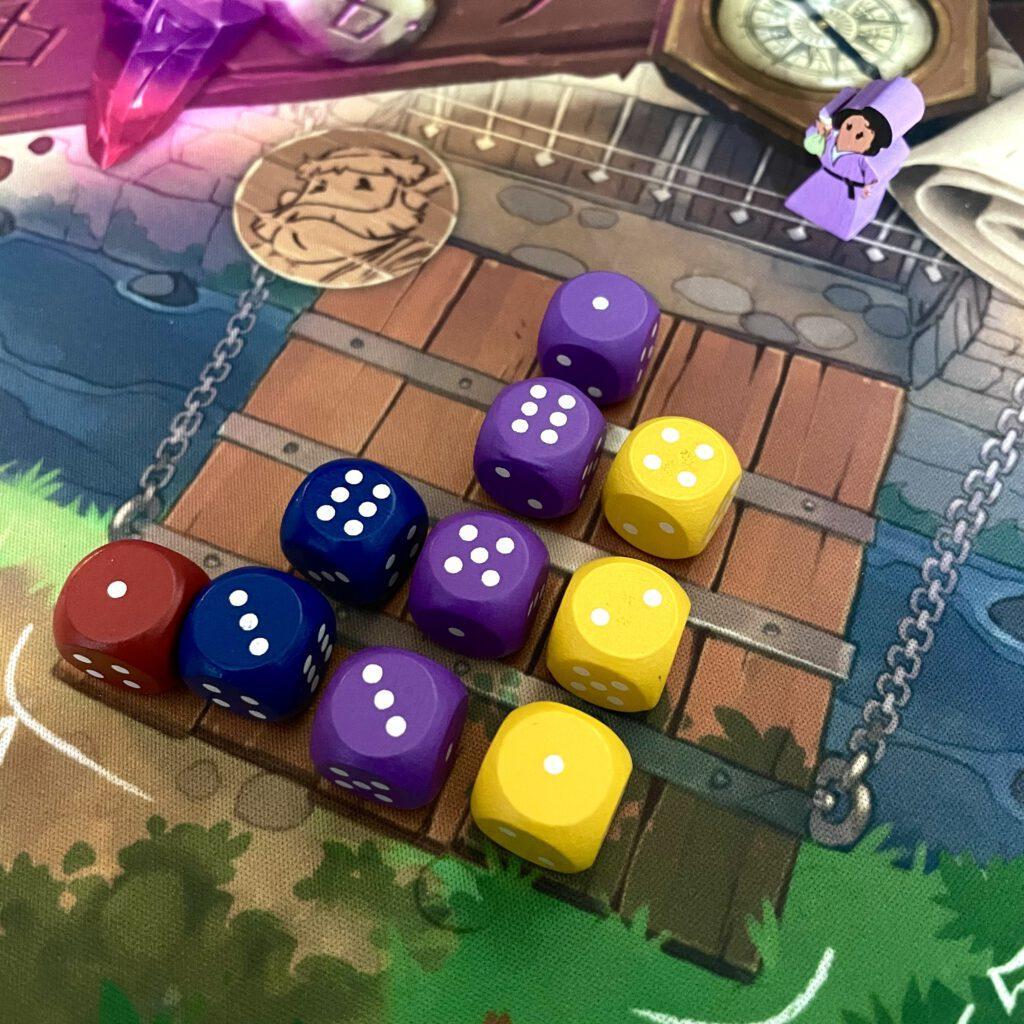 The sheriff is angry and orders his troops to stop the bandits. The bandits are arrested and sent to Nottingham prison. Who knows what their fate will be? Maybe the sheriff's guards can be bribed?

Rumble: All remaining dice are placed on the drawbridge, make sure not to change the results. On the drawbridge you form a column of your color dice.

Arrests and bribes: If the sum of your dice is greater than 10, your gang leader will be arrested. You may not use it the next round to get help from the merry men. Arrested gang leaders are put in prison. If the sum of your dice is less than 5, you receive a victory point or a random loot token. To make sure you don't get arrested, you can hand in 1 loot token to remove your lowest die. Did you just have a total of 11? Then you can, for example, bribe the guards with a loot token and remove a die with the value 2 to escape the prison.

Riches and cleanup: The players have escaped the sheriff (or not) and run off with the loot! Remember what kind of loot you stole. There are 3 colors of bracelets, necklaces and rings. In addition, there are also coins. These color and jewel combinations are important for the final score! All loot tokens are deposited in the chest. During the depositing of the loot tokens you can already hear the next loot wagons coming!

In addition to these phases, you also have the option to ask for help from the 'merry men’. These are Robin Hood, Friar Tuck, Lady Marian and Little John. You can ask for help with your gang leader once per turn. This gives you certain benefits that are on the respective merry men cards. For example, with the help of Lady Marianne you can already view 2 of the loot wagons while placing your bandits.

The day is over when 4 rounds have been played. At the end, players receive victory points for different combinations of jewels they have in their chest. For example, you get 6 victory points for 3 rings of the same color. It is therefore important that you have tried to get as many combinations as possible while playing! The player with the most victory points has impressed Robin Hood the most and will be allowed to join the merry men! 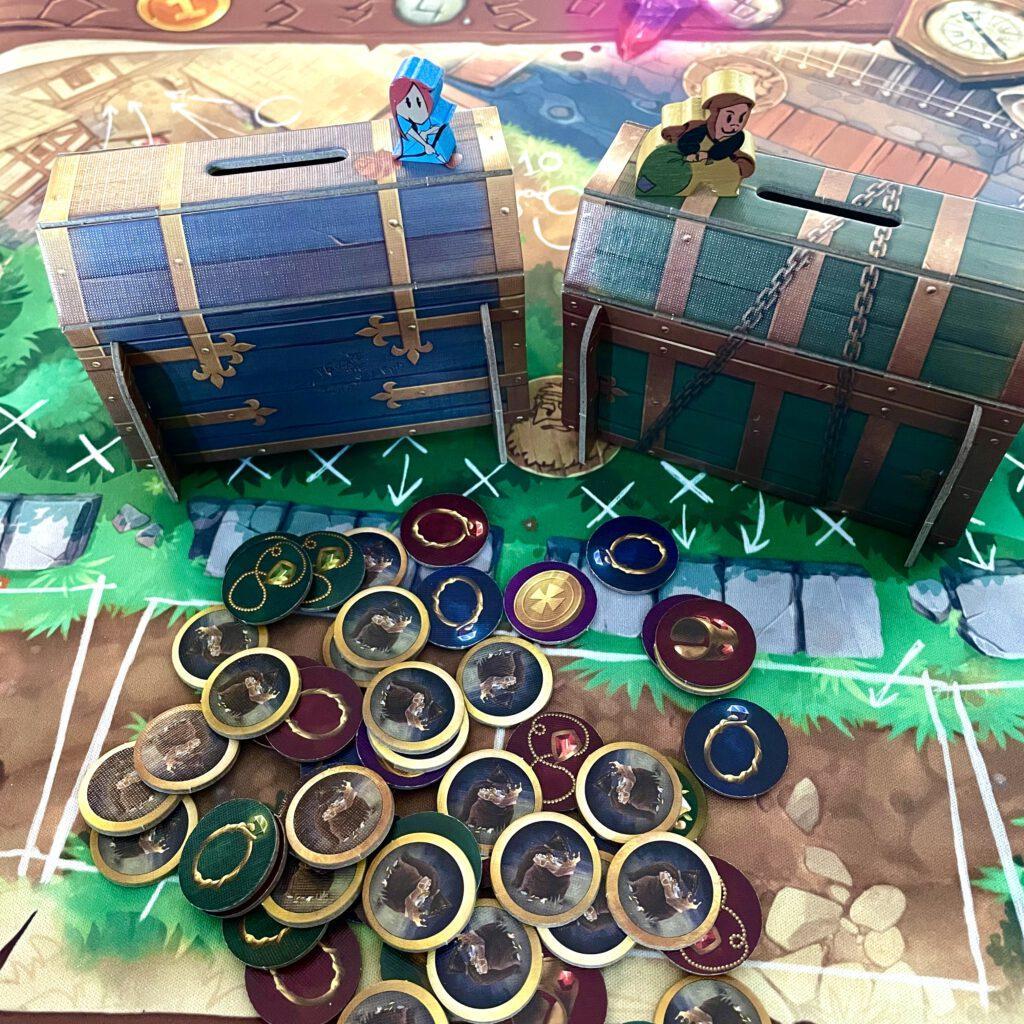 Fortunately, we can now say that we understand the rules of Sherwood Bandits. Otherwise would never have been able to tell you that it is a very nice little game. Sherwood Bandits may seem like a bigger game at first glance, but we say little game consciously. As far as we are concerned, it is a very good filler or a game to play quickly during a busy day. Make sure that you already understand the rules of the game or that you have a fellow player who already knows the game.

Enough about the rules of the game, Sherwood is a really fun and original game! The game contains recognizable elements such as the push your luck mechanism of Quacks and the throwing of dice as in games like Clever. The combinations of the different elements ensure that Sherwood Bandits feels innovative. You play with dice in a different way. For fans of dice games, this game is definitely worth it!

We think the art is very nice and beautifully designed. The cards are beautiful and the bandits are of high quality wood. It is nice that you can put your loot in a chest and you cannot see until the end which loot you have collected. Unfortunately, you always have to assemble these boxes when you put them on the table. This makes it so that they are reasonably sensitive to damage. There is also a beautiful player mat to make the game even more beautiful than it already is! By the way, if you often play with 5, there is also an expansion that adds a 5th player! Mocht je trouwens vaak met 5 spelen is er ook nog een uitbreiding die en 5e speler toevoegt!

We will not play Sherwood Bandits multiple times in a row. However, this game will often be on the table during game nights! It is the perfect game for the start of the evening or for later in between the bigger games. Although the rules of the game may be a bit difficult, we think that you can also play Sherwood with the novice player. The dice are of course a recognizable element for fans of Qwixx and Clever. Perhaps you can still convince that one friend who normally does not feel like a bigger board game. All in all, it is certainly a versatile and original game. We are happy with this addition to our game shelf. 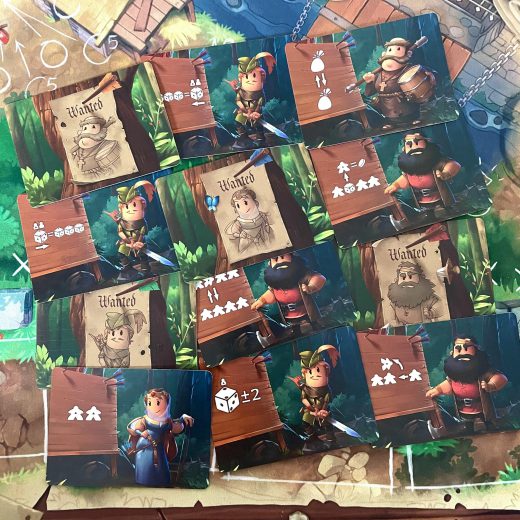 Sherwood Bandits is better suited for 3 players or more. This is a disadvantage for us as we mainly play with 2 players. You can play the game with 2 players using a "non playing character". Furthermore, the rules of the game also change a little bit. We are not such a fan of when the game calls for an NPC. In addition, the change of the game rules for 2 players in this game is not an improvement. Due to the adjusted game rules, you cannot decide for yourself which loot goes into your treasure chest. As a result, this nice element of tactic just disappears. Of course there are ways by which you can solve this yourself. For example, by both playing 2 colors. There is certainly enough space and flexibility in this game for your own input!

This game has been kindly gifted by the publisher for review purposes.