Root is a war game in which you try to take control of the wilderness with your chosen animal faction. 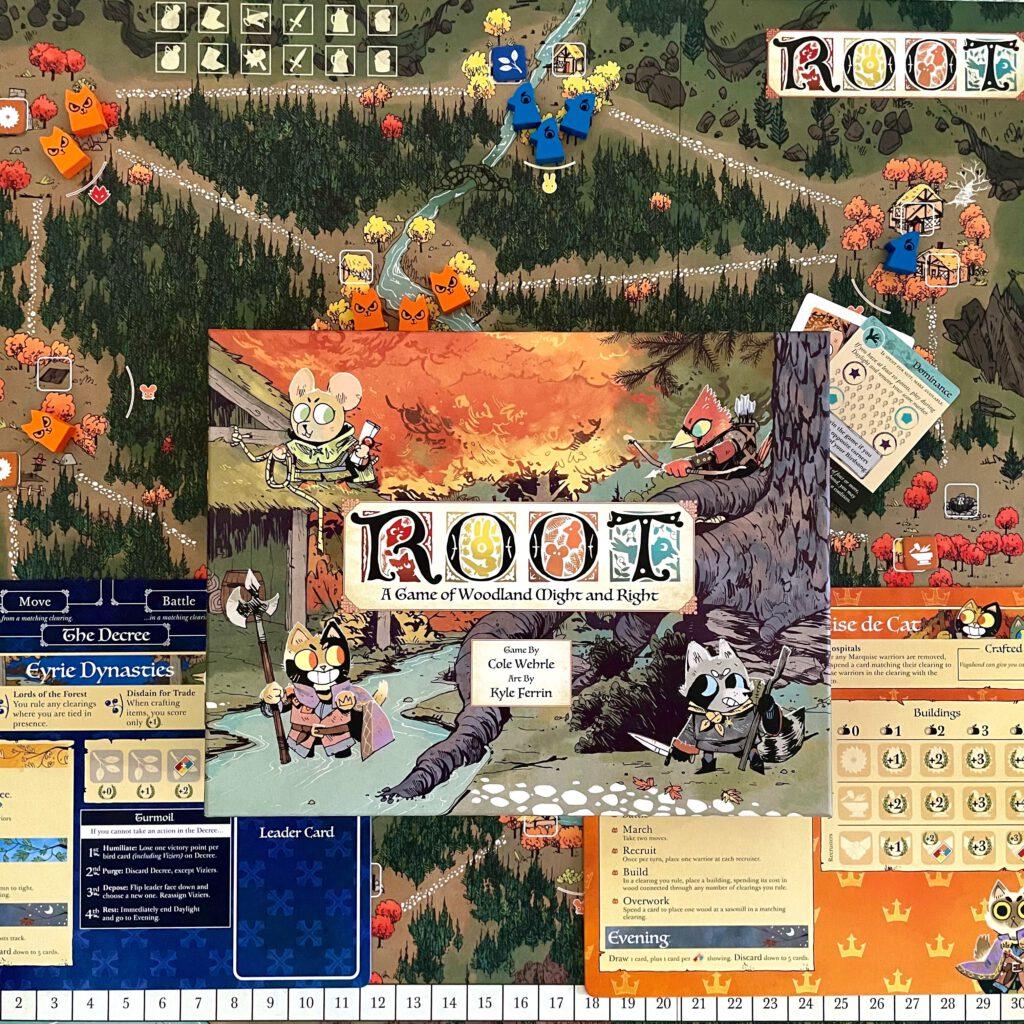 Root is a asymmetrical war game in which you try to get the most area influence. Each player chooses a faction that each has its own specific playing mechanism.

Root is asymmetrical, meaning that each player plays a different animal faction and therefore has different abilities. As a result, the setup of the game is also different for each player. In the base game there are 4 different factions that you can play, these are Marquise the Cat, Eyrie Dynasties, The Woodland Alliance and the Vagabond. Each of these factions contains different mechanisms. For example, with the Cats you build an engine and with the Eyrie you build a deck. The Alliance tries to build relationships with other factions and the Vagabond has its own secret story.

The war you are fighting takes place on the game board. The game board shows a forest with several clearings. With certain factions you try to expand your influence by getting a majority in these clearings as possible. During your turn you can, among other things, move and/or build troops. If you are attacking another player you must roll the dice to conquer new territories.

Because you all play a different animal factions, you also win in different ways. Most factions score points when they conquer an open field, for example. Once you reach a certain number of points you win the game! 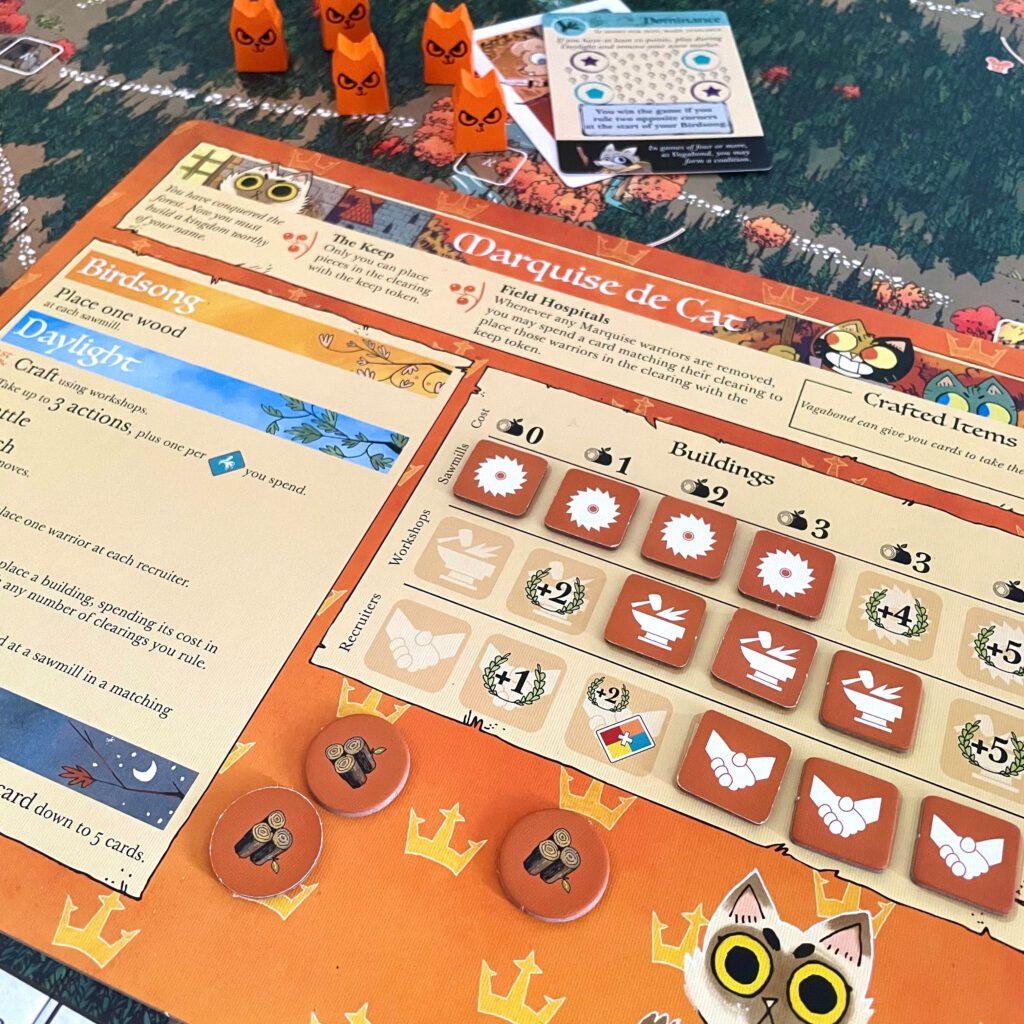 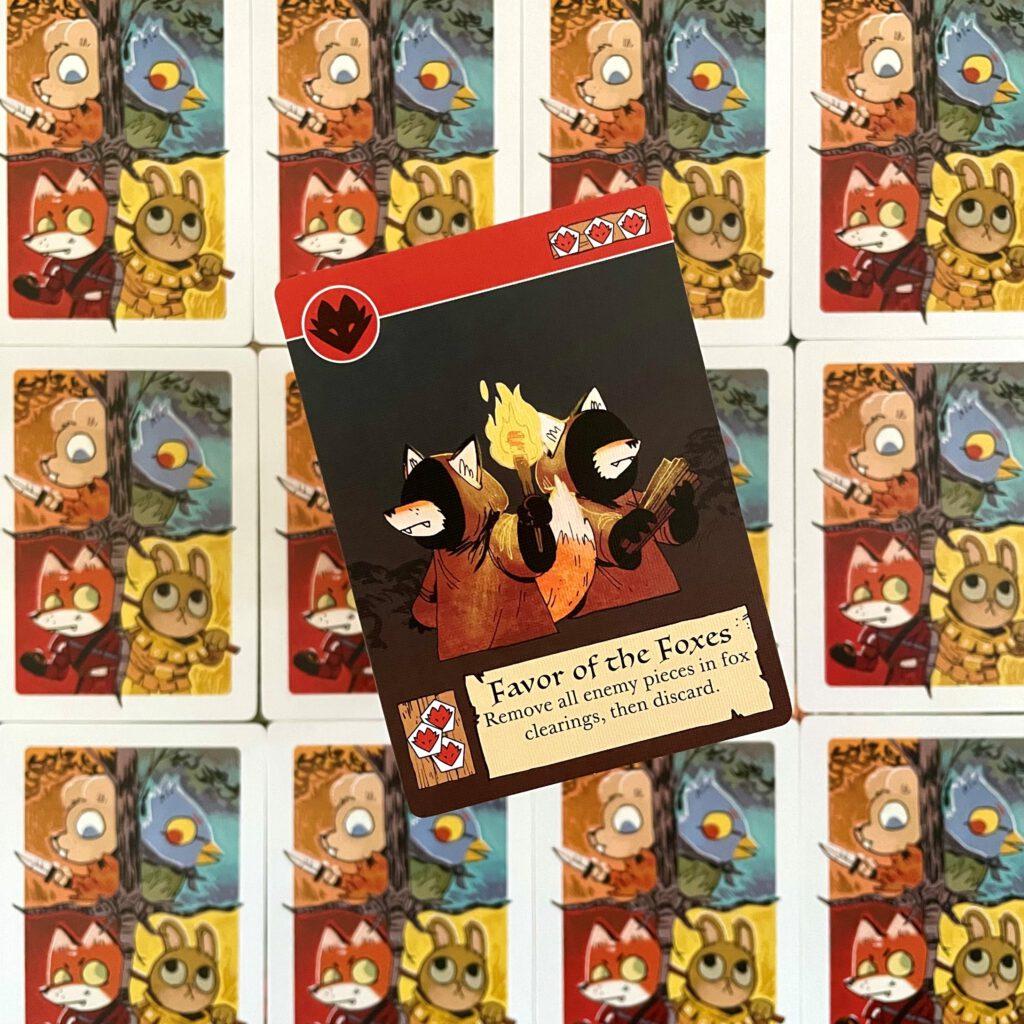 Root is a hugely extensive game which is fairly complex in its design. Once you understand the basics of the game you can quickly start learning your chosen animal faction. The rules of the game are quite clearly explained, but we found it more understandable to watch a video. Because each player board is also a player aid that tells you exactly what to do, you don't have to keep looking up the rules.

In terms of gameplay, Root is really well put together. Especially if you like asymmetrical games this is a must-have. Root is a game you have to learn to play. You should not expect that you will be able to master the game after playing it a few times. We had to play it at least 3 times before we started to understand how we could interact with each other and what each other's strengths and weaknesses were. You are therefore always interacting with each other and that keeps the game interesting even if it is not your turn.

The first few games we experienced that the combat system with the dice felt a bit unfair. It can happen that you attack with a majority but still lose a lot. A certain dice result can have a lot of influence on the course of the game in the beginning. As you learn the game you will learn when to take certain risks and what the best moments to attack are. Because the dice are involved, a little bit of luck remains in the game.

We have not yet had the chance to play Root with more than 2 people. For 2 players, it is actually always advised to play with Marquise the Cat and Eyrie Dynasties. These 2 factions have a nice dynamic together and play well into each other. However, we are extremely curious to play with the other factions. Since we haven't played with these 2 factions yet, we can't say anything about them, of course. It is a pity that the other factions do not play nice with 2 players.

Because Root is an asymmetrical game, there might be a slight difference between how good the factions are. That's why we always like to swap factions after a game and play again. Then when you add up your points you come to a fair result. And let's be honest, we like Root so much that it is certainly not a punishment to play it again.

In addition to the base game, there are also a lot of expansions available for Root. These add new factions and ensure endless replayability. We are still busy with the base game, but secretly very curious about the expansions.

- Takes a while before you understand everything
- You can only play 2 (advised) factions with 2 players.

This game has been kindly gifted to us for review purposes by Leder Games.