In Paper Dungeons, you go on an epic adventure with different heroes, defeating monsters and bosses along the way! 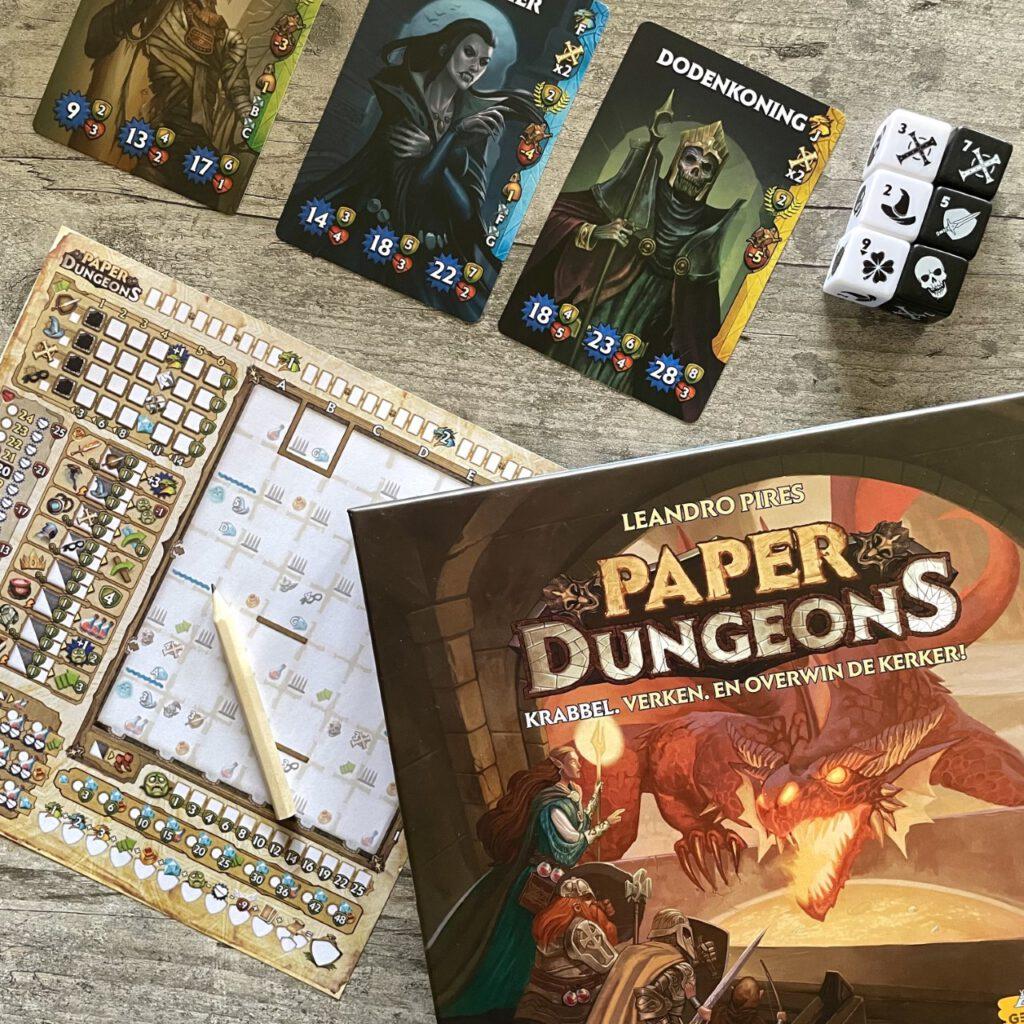 Paper Dungeons is a  roll & write game in which you go on an adventure with heroes in a dungeon full of dangerous monsters.

You start the game by drawing a story card. This contains a story about the dungeon and where the monsters are. Each player receives two personal goal and power cards of which you may choose one of each. Power cards vary but can give you advantages such as not losing a life when walking into a trap.

The game is divided into 8 rounds. After round 3, 6 and 8 you can always fight with a boss, or run away! At the beginning of each round, someone throws all the dice. If you throw skulls, you immediately lose lives, which you mark on the bottom left of your sheet. During the game, you can also brew magic potions that allow you to absorb damage instead of taking it yourself. After this, each player may use three dice. You can use dice to make your heroes stronger, but also to move around the map or create artifacts. Strong heroes are needed to defeat monsters, artifacts can be used for advantages during or at the end of the game. You may use any die to move 2 steps, you then draw a line from the starting point at the bottom of the map through all the rooms you move through. Each time you enter a room, you complete the action on it. For example, you may have to defeat a small monster or take damage from a trap, but sometimes you may also get a magic potion!

You can only defeat bosses if you have already been to the room where the boss is. You then look at the boss' map to see how many points you gain or how much damage you receive, depending on how strong your team of heroes is!

At the end of the game, defeat the final boss and add up all the points; the player with the most points wins the game! 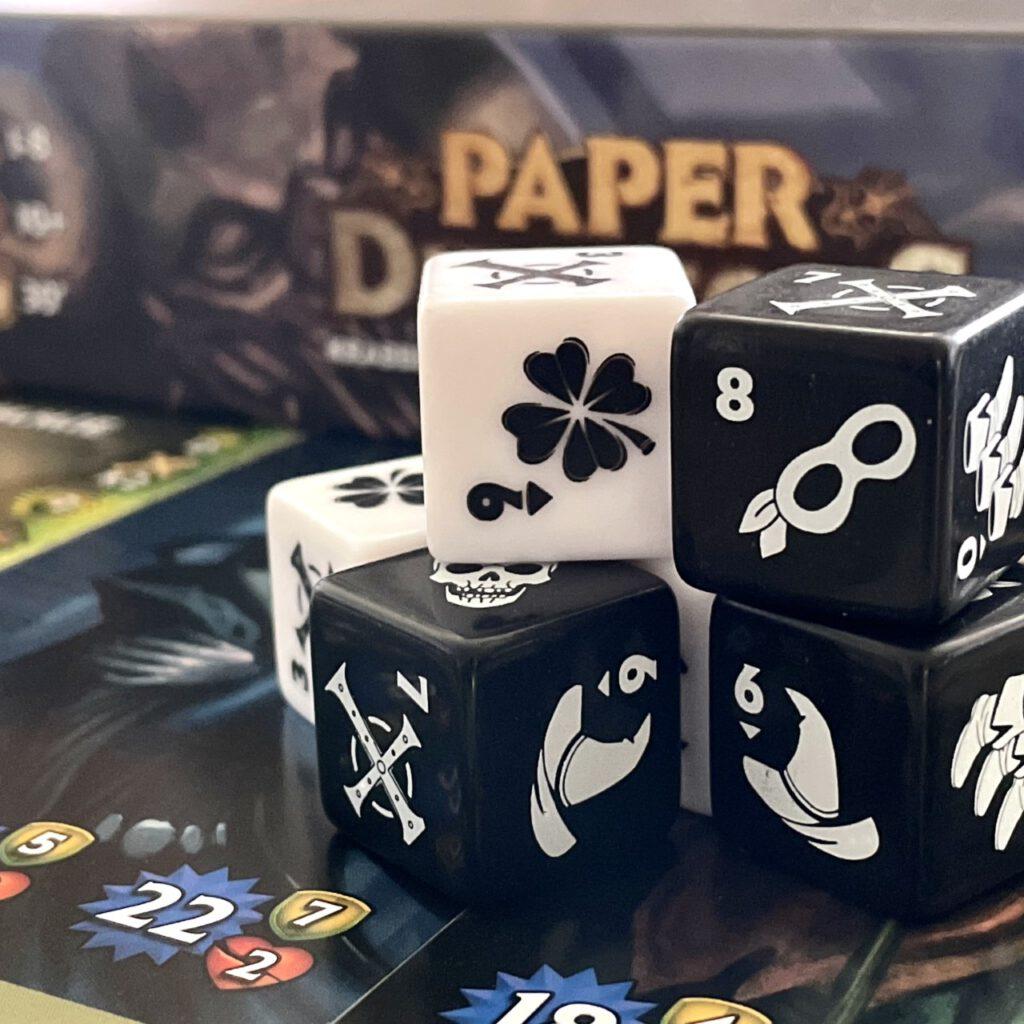 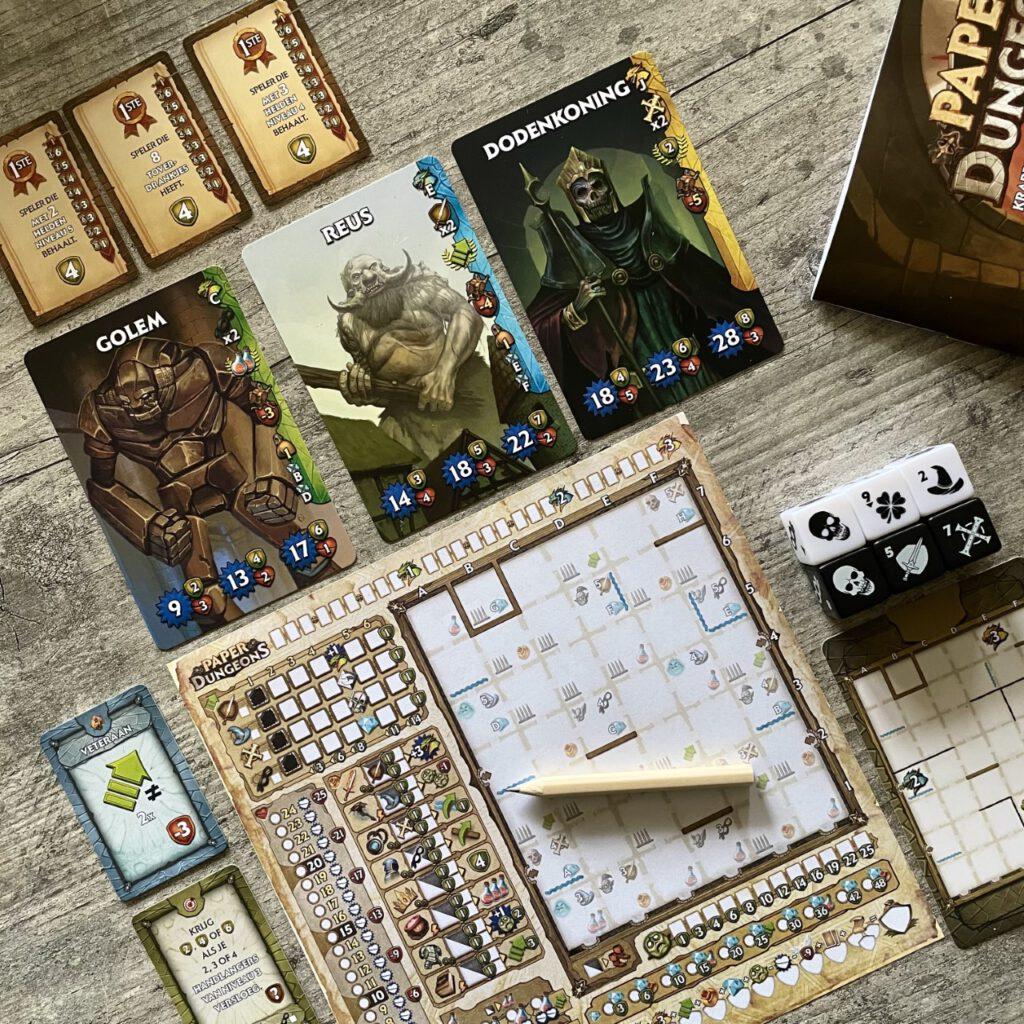 If you've known us for a while, you know that we love roll & flip. There are just enough of them in our collection! However, we are still very excited when new roll & writes come out. Sometimes there are still quite original games among them. Paper Dungeons is such a game! A Dungeon Scrawler game, wrapped up in a roll & write.

Paper Dungeons is a roll & write that you don't see very often. Besides the fact that the theme is strongly reflected in the game, for example through the stories on the cards, the game is also very extensive. Each game uses a different starting card, goal cards and power cards. This ensures that every game is slightly different. You could say beforehand that the replayability of Paper Dungeons is very high. At first, we thought so too. However, if you read reviews on BGG, you will see that many people complain about the replayability. On the one hand, we don't understand this, because unlike other role-playing games, there is plenty of variety. You can even play Paper Dungeons in campaign mode.

We have played Paper Dungeons a few times now and understand a bit better what people mean. Despite the fact that the game contains different cards each time, the game still feels a bit the same after a few games. Have you found a good strategy? Then there is a good chance that you will use it more often. Still, we would not say that the replayability is bad. In our opinion, the replayability is comparable with other roll & writes such as Trails or Tucana. The criticism about this is not justified, as far as we are concerned.

Paper Dungeons is a super original roll & write with a very cool production. The game looks nice on the table and really gives you the feeling of a dungeon crawler. Of course, you shouldn't expect a pocket Gloomhaven, but if you love games like Gloomhaven, you'll really like Paper Dungeons. How nice is it then to take this game with you on holiday, for instance?

For fans of roll and write, there is little that can go wrong with Paper Dungeons. You can easily put the game on the table and have at least half an hour of fun. We would definitely recommend Paper Dungeons. Not a fan of dungeon crawlers but a fan of roll & writes like Railroad Ink and Trails of Tucana? Then you should definitely give Paper Dungeons a try. The game is easy and accessible enough for everyone! 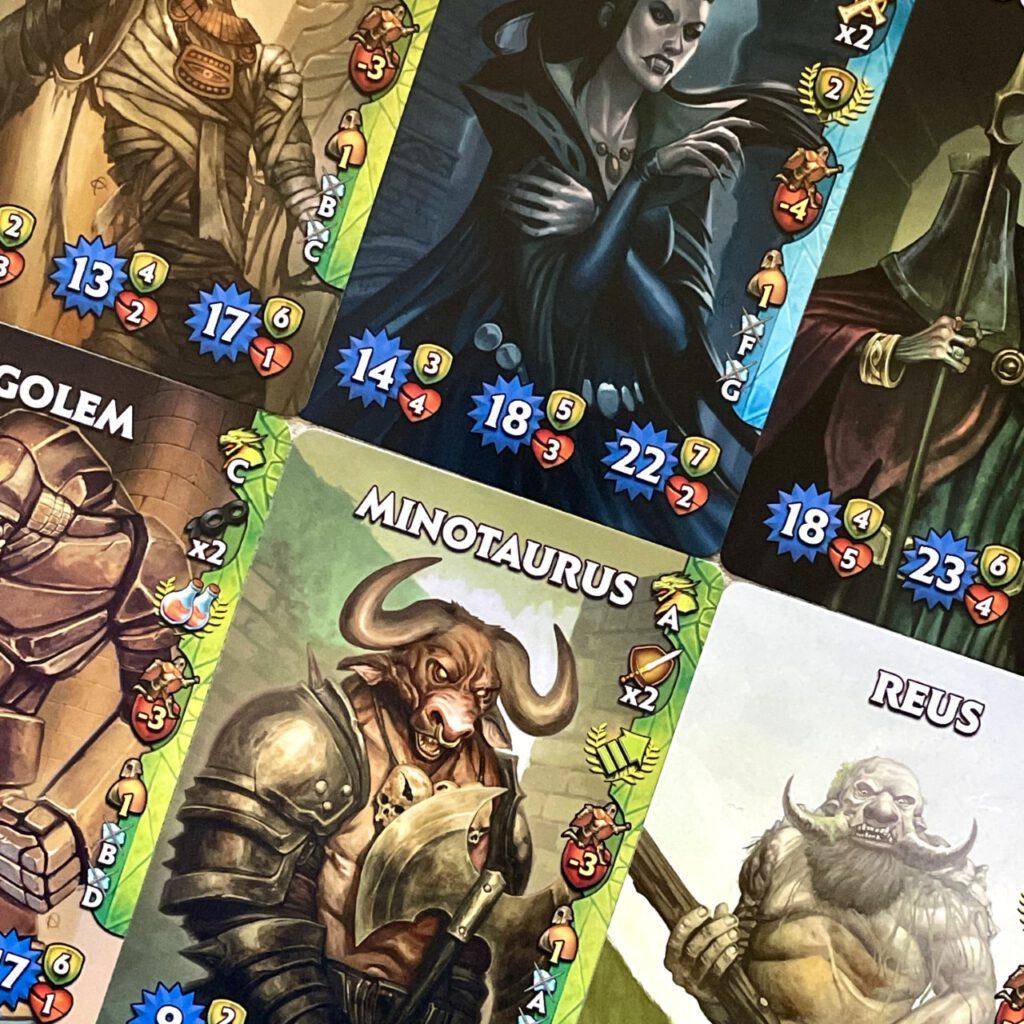 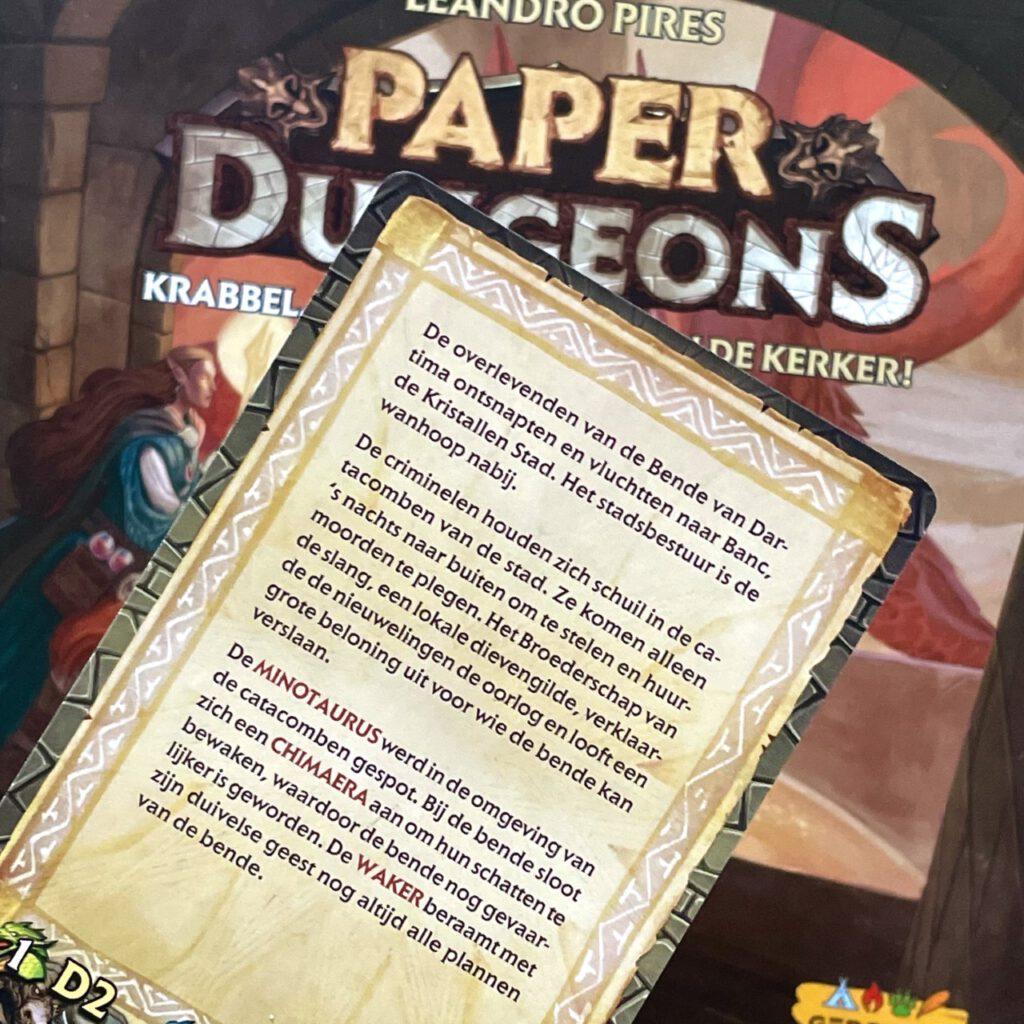 - Feels a bit the same after a few games

This game has been kindly gifted to us for review purposes by Geronimo Games.