Paleo is a cooperative adventure game in which you must keep your tribe alive in the dangerous stone age. 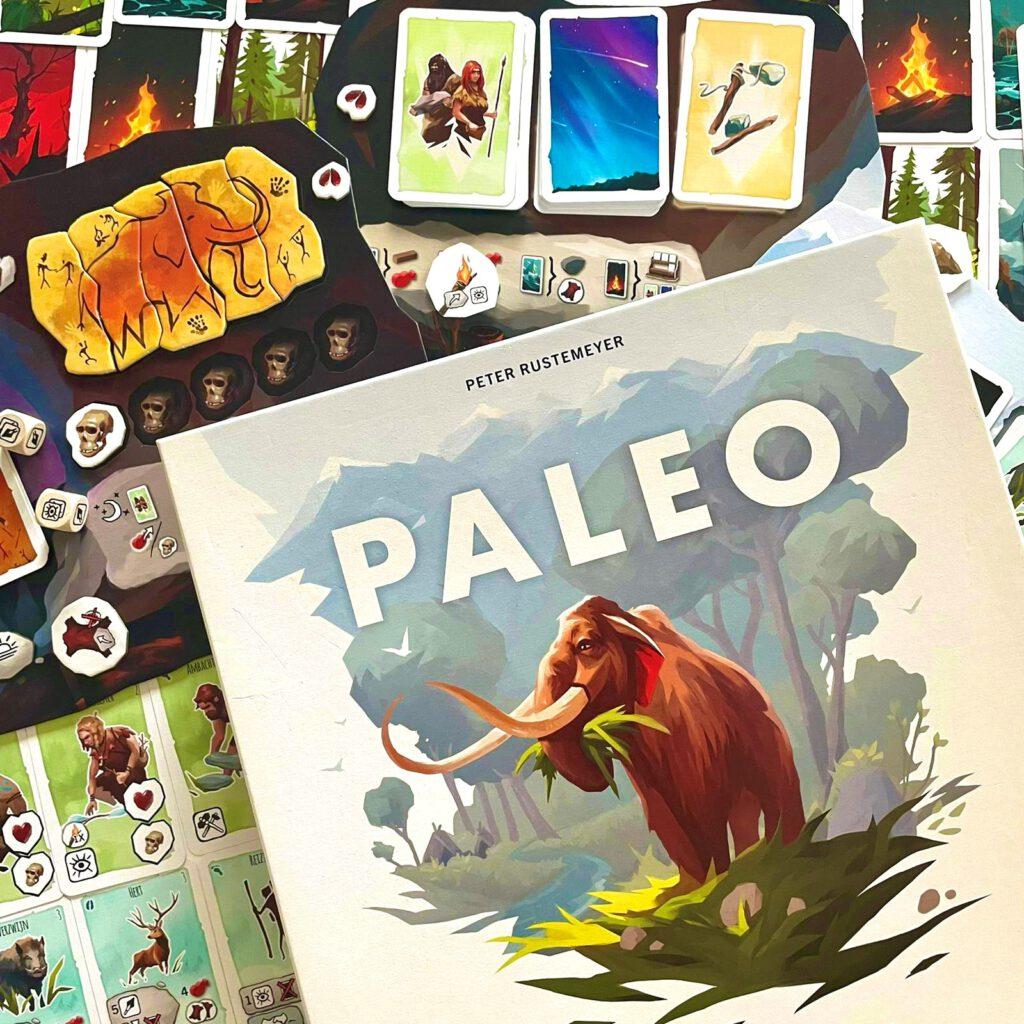 Paleo is a cooperative adventure game which is set in the stone age. You try to keep your tribe alive while completing dangerous missions.

You start the game with 2 tribe members and each player gets a roughly equal stack of adventure cards. From this pile you always take 3 cards of which you may turn over and use 1. Everyone does this at the same time so you never know what the other players will get. Next, this card tells you what you can do. You can hunt animals for food, cut trees for wood or you could be in danger and end up under an avalanche. The back of the card does give you an indication of what kind of adventure you may encounter, but this is certainly not a guarantee! When your deck of adventure cards is depleted, you go to sleep and the night starts.

The game takes place in a campaign, in which you put different modules together. These modules consist of a number of cards, including mission cards and adventure cards. You must be able to complete mission cards at night or you will receive a skull. For example, a mission card could be that you need to pay a wood, stone or a tent. If you can't complete this you get a skull and at 5 skulls you lose the game. Your tribe members need 1 food each at night. For each non-fed tribe member you also get a skull, so it can go fast! On some adventure cards you get a cave drawing as a reward, if you have 5 of these you win the game and you can move on to the next adventure! 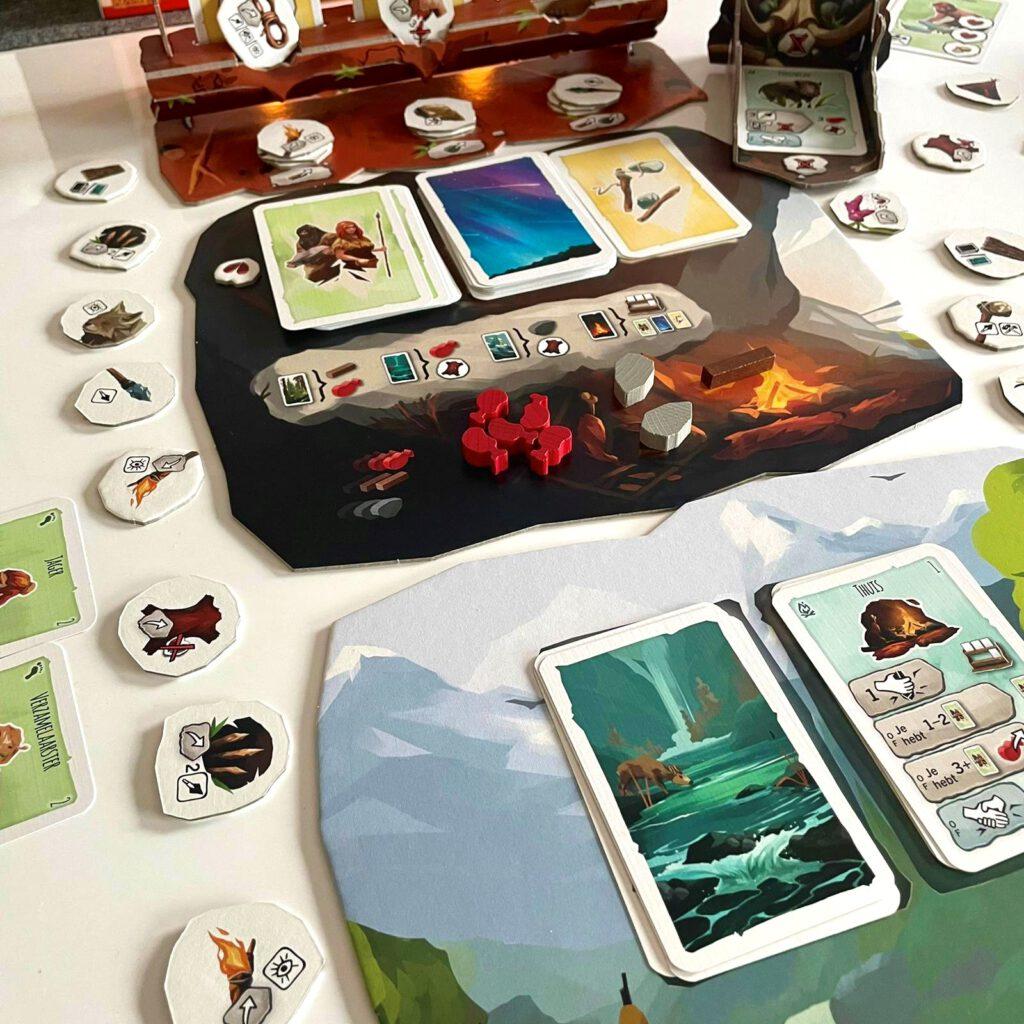 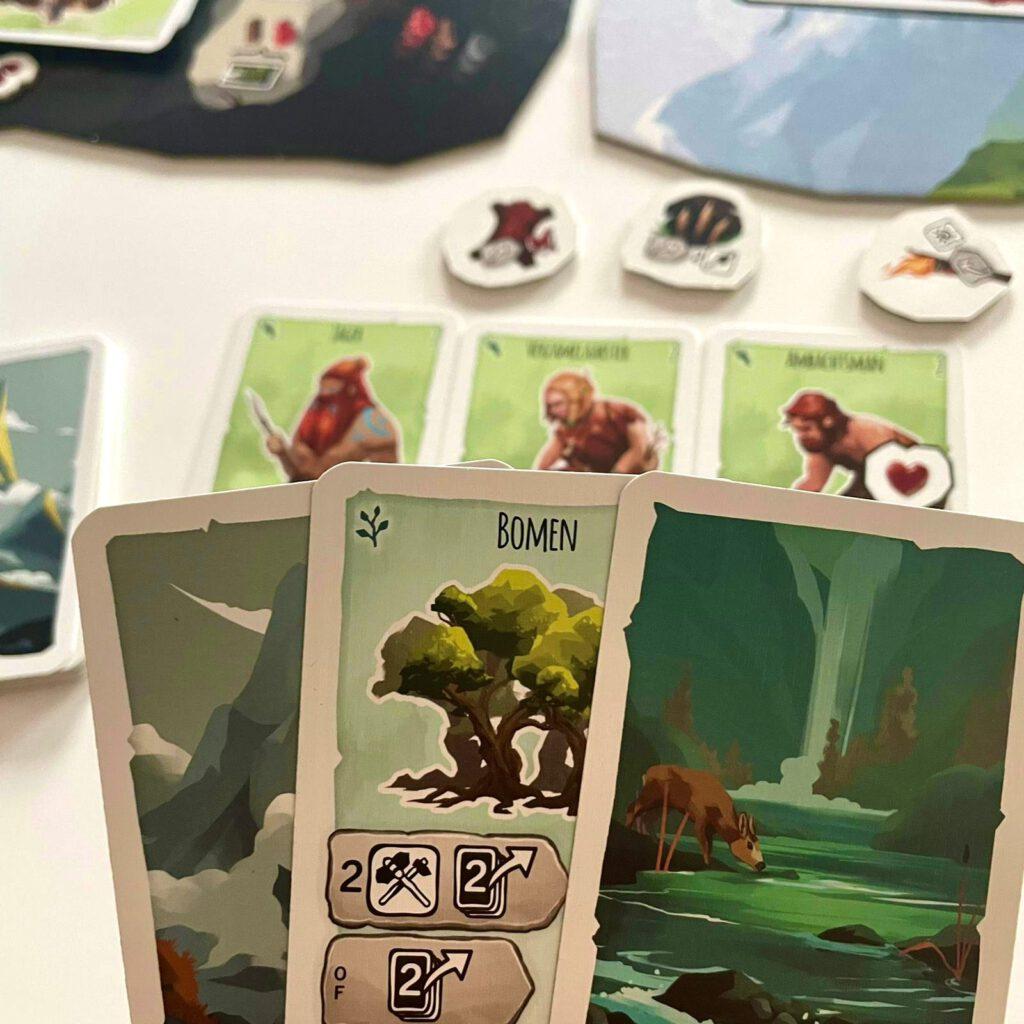 Paleo was one of the first board games we added to our collection. It was also our first cooperative game with a campaign. In the meantime we have played quite a few of these games, but we are still fans of Paleo. For us, it was the perfect introduction to this genre of board games!

Let's start with a major drawback to Paleo, the rulebook. The rules of the game are not clear. We regularly ran into the fact that certain situations and interactions were not described in the rulebook. In that case we had to contact 999games to find out how to play a certain scenario. Especially when you like to do all the actions correctly and fairly, this can be annoying. Paleo's rulebook leaves many things open to your own interpretation. Fortunately, we were able to successfully play through the entire campaign. We can't promise that we didn't make any mistakes, but we enjoyed the experience immensely!

Paleo is a fairly simple campaign game. The actions you can perform speak for themselves after a few games. It is still quite a challenge to successfully complete all scenarios. In our case we always had to play most scenarios twice. During the first time you learn what you need to keep an eye on. For example, after your first game you know that you need to provide enough food or wood. During your second try you can then focus on this. Are you still not successful? There are also special rules to make the game easier or more difficult.

The theme of the game is nicely implemented in the additional components such as the card holder. This makes you feel like you are surviving in the stone age with each other. Unfortunately, there is not really an ongoing story in the game. As far as we are concerned, this is a missed opportunity. Often we find this the best thing about campaign games. We can imagine that for beginners it is nice that Paleo does not have much things around it. You have the game with certain actions, different scenarios and some nice components for the theme. Especially if this is your first experience with a campaign game, that might be enough.

The fact that Paleo is cooperative is one of the reasons we are big fans of the game. After all, we love working together in games. Also, you can easily explain this kind of game to new and less experienced players. We can imagine that Paleo, with a little help, is also very fun to play with children. This makes it a versatile game.

Despite the fact that the rules may not be as well defined, Paleo is simply a very good and entertaining game. We can imagine that many new and experienced board game players would have a lot of fun playing Paleo. So we would definitely recommend this game if you like cooperative games with a campaign. 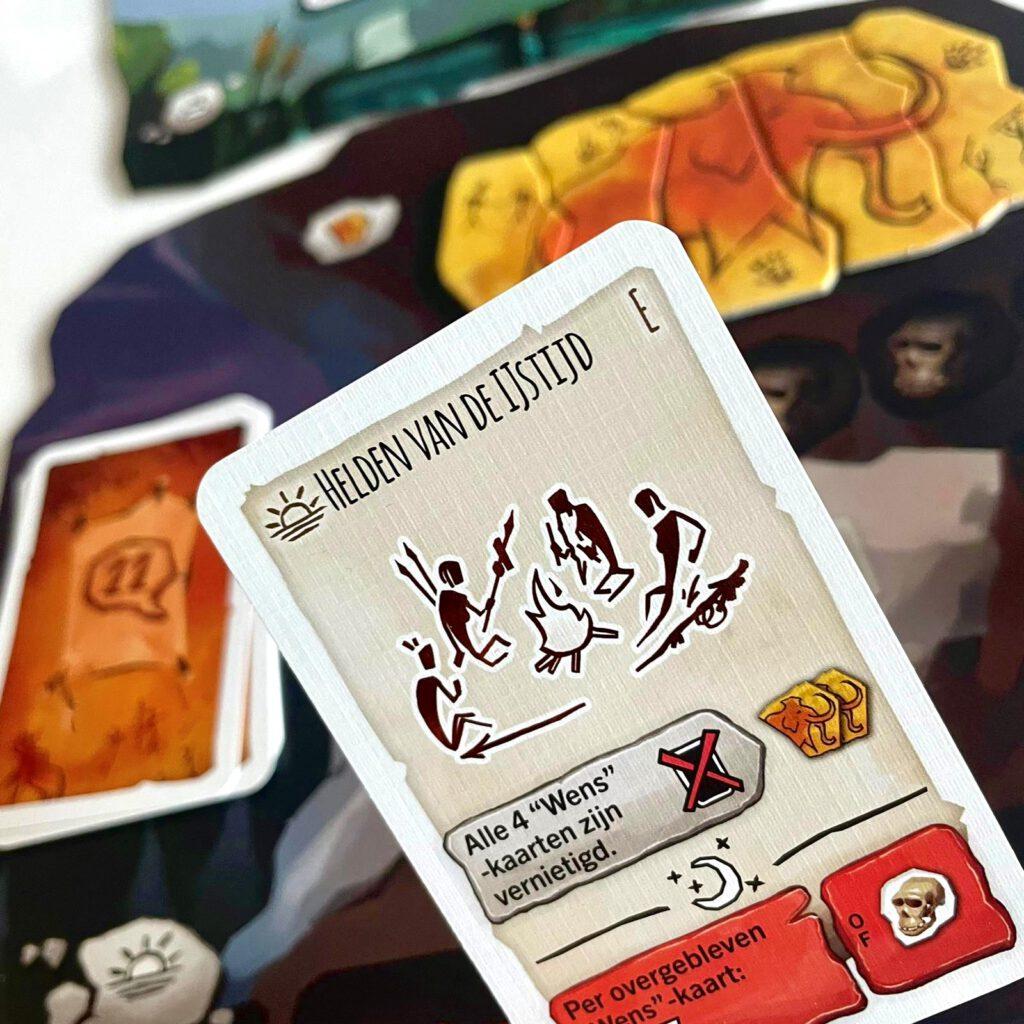 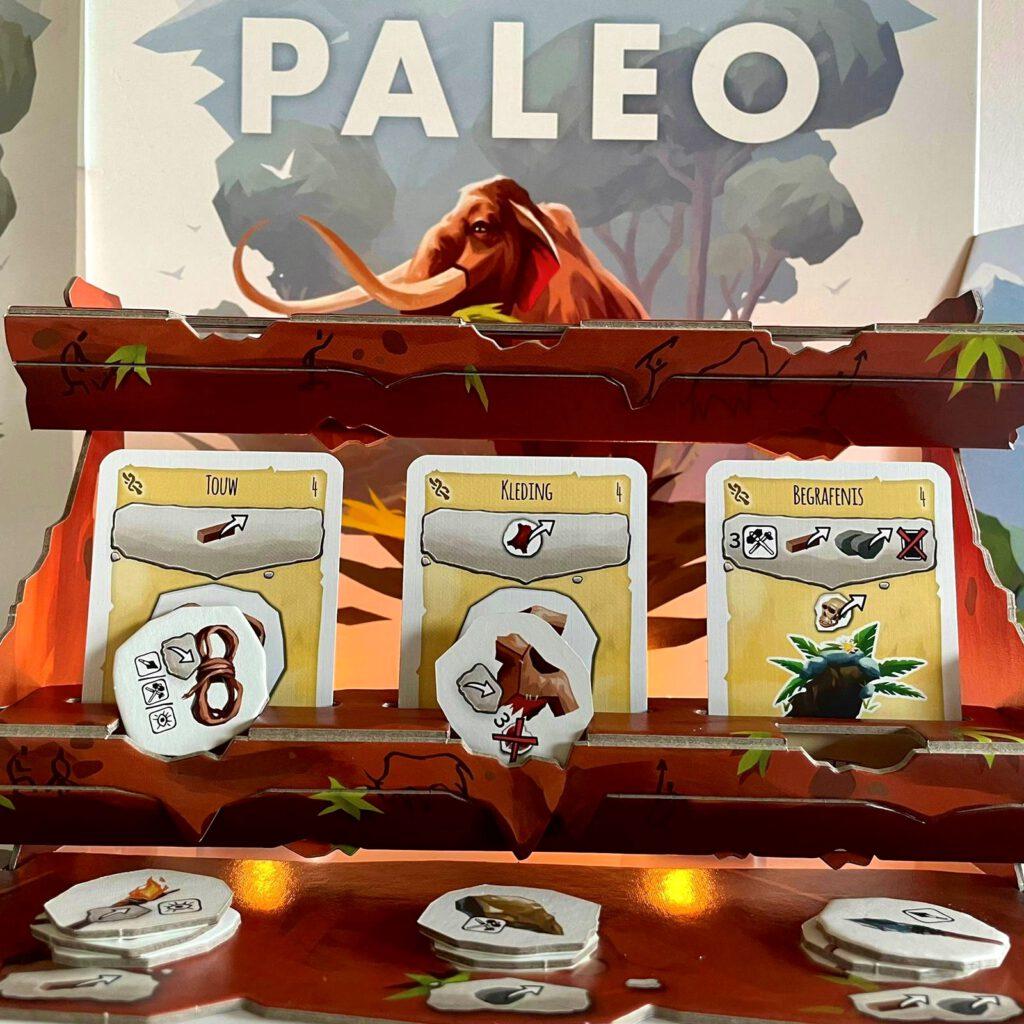 - Rules are unclear
- Not really a story in the campaign

Use the code 'SPELLENPLANK' for a 10% discount on your order!

Buy us a cup of coffee
PrevPreviousGift suggestions under 20 euro's
NextReview: Juicy FruitNext