In Libertalia, everyone uses the same pirate crew, but you try to outwit them all by using them in the best way! 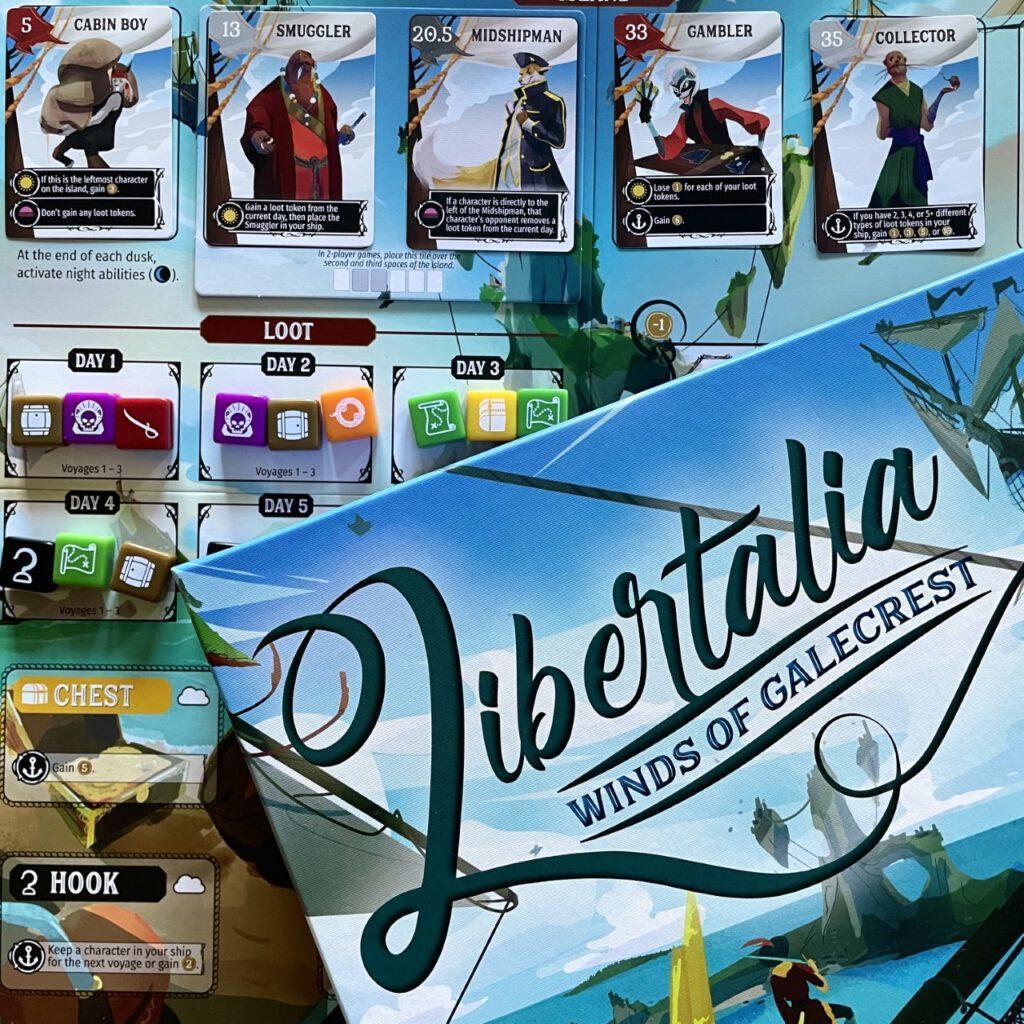 In Libertalia, you receive a number of pirate cards each round. Your opponents receive exactly the same cards, so you have to pay attention to the timing of your play. Each card has a certain strength, the higher the strength, the more to the right the card may be placed on the activation fields during a round. Higher cards are activated earlier in the night phase, so you may sometimes wipe cards from other players before they activate their action. So you try to thwart each other while you collect as much loot as possible. When activating your pirate card, you may also take a loot token from that day, which also has an associated action.

Once everyone has played their cards, the round is over and you deal with all the cards on your ship that have an anchor symbol. This gives you a money which you can put in your chest. Once in your chest, your money can never be stolen again.

There are 3 rounds played, each lasting one day longer than the previous, the final round lasts 6 days! In later rounds you may have saved cards because you have 5 starting cards and in the first round only 4 days. This makes the game a bit more assymetrical as it progresses. At the end of the game, the player who has collected the most money wins! 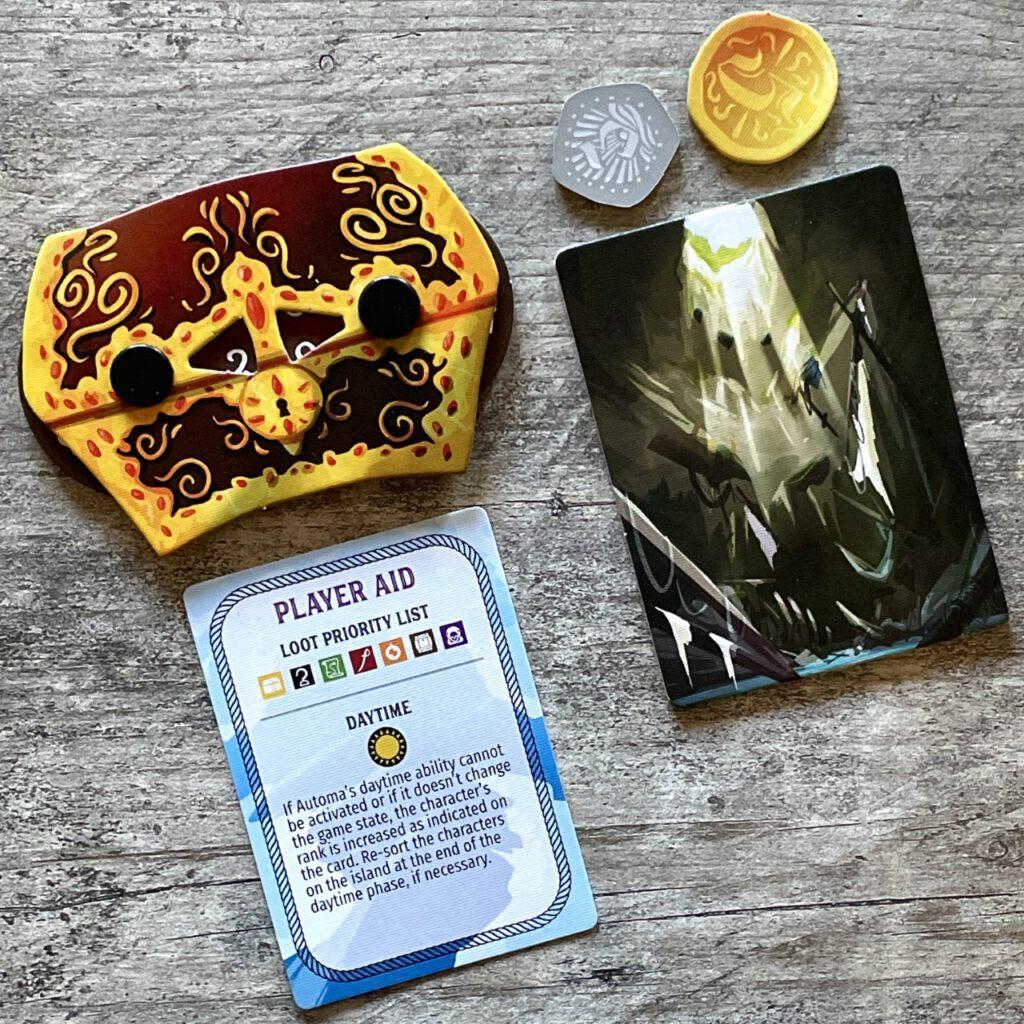 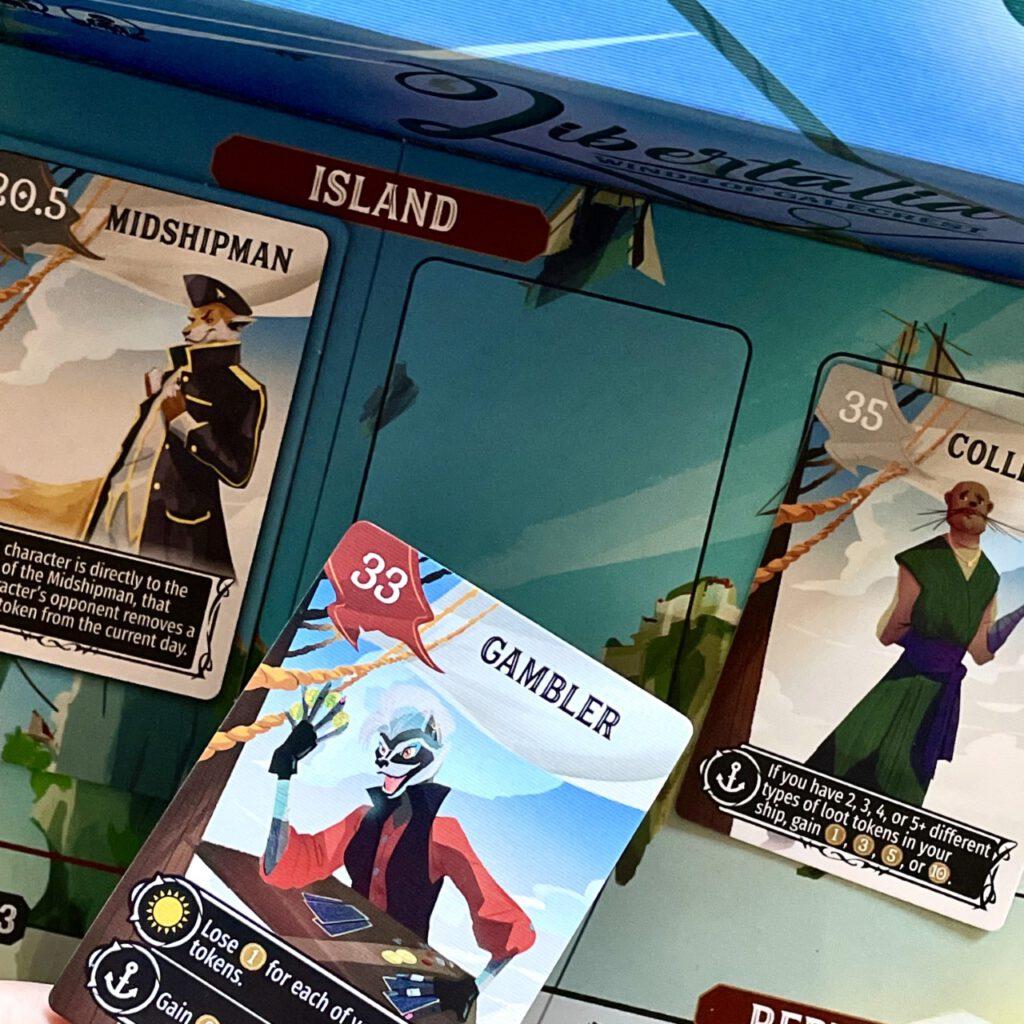 Libertalia is a game that we were very excited about beforehand. We really wanted to like this game, but we also expected to like it. After reading the rules, we became even more enthusiastic. Libertalia seemed exactly a game that would fit into our street!

Before we put Libertalia on the table, we read several reviews ourselves. The reviews were very diverse, but a recurring argument was that Libertalia is less fun with two players. Because we almost always play with two players, our first game of Libertalia was also with two players. Partly due to the high expectations and the fact that we played with 2 players, our first game of Libertalia was a bit disappointing. The game felt a bit 'random' and we didn't get much fun out of it. We couldn't quite place it, because we really like the mechanisms that come back in the game. It was a combination of negative player interaction that appealed to us less and a general 'hmm' feeling. The conclusion after our 1st game was that our love for Libertalia had to grow, and that we would love to play this game with multiple players one day.

Libertalia is a very tactical game because everyone gets the same cards and you have to think very carefully when you play these cards. You also have to be able to estimate what other players have or want to play. This mechanism makes Libertalia really a game that you have to learn to play in order to become good at it. The better you know the strengths and weaknesses of all the cards, the better you will become at the game. We can imagine that it can become very competitive on a high level!

After a few games we noticed that Libertalia is indeed a game that you should play more often. When you play more often, you learn which cards are good and how to play them. When you understand this, it makes for interesting choices. We ourselves have also noticed that it matters which cards are in the game. For example, we like some cards more than others. Libertalia slowly started to become more fun for us. But, we admit that the game with 2 players does not have the 'wow' factor that we expected.

That 'wow' factor only came into play for us after we had played the game with several players. In a game with more than 2 players, the player interaction is more present and your choices feel much more meaningful. Unlike some games, Libertalia does not take an annoyingly long time with, say, 4 players. It is a fun, challenging board game that also plays smoothly with a group of 4. This is nice, because it gives us the opportunity to play a game like Libertalia with friends instead of just smaller games. The game has a different dynamic with multiple players. In our opinion, this gives the game the 'chaos' it needs to be better.

Meanwhile, we can say that we like Libertalia. With 2 players we will not put it on the table soon, but for an evening with friends it remains a nice option. The mechanisms provide a challenging, tactical evening with lots of interaction. Definitely worthwhile if you play more often with more players! 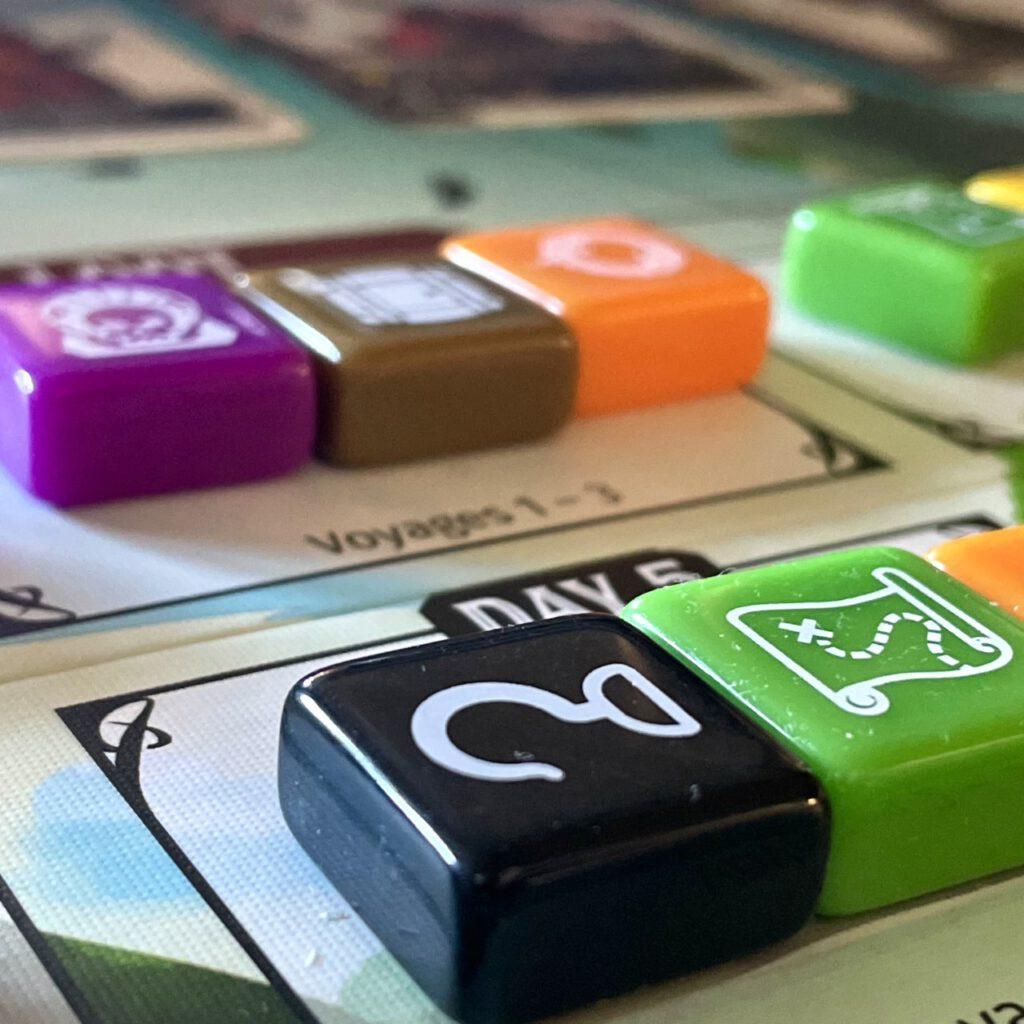 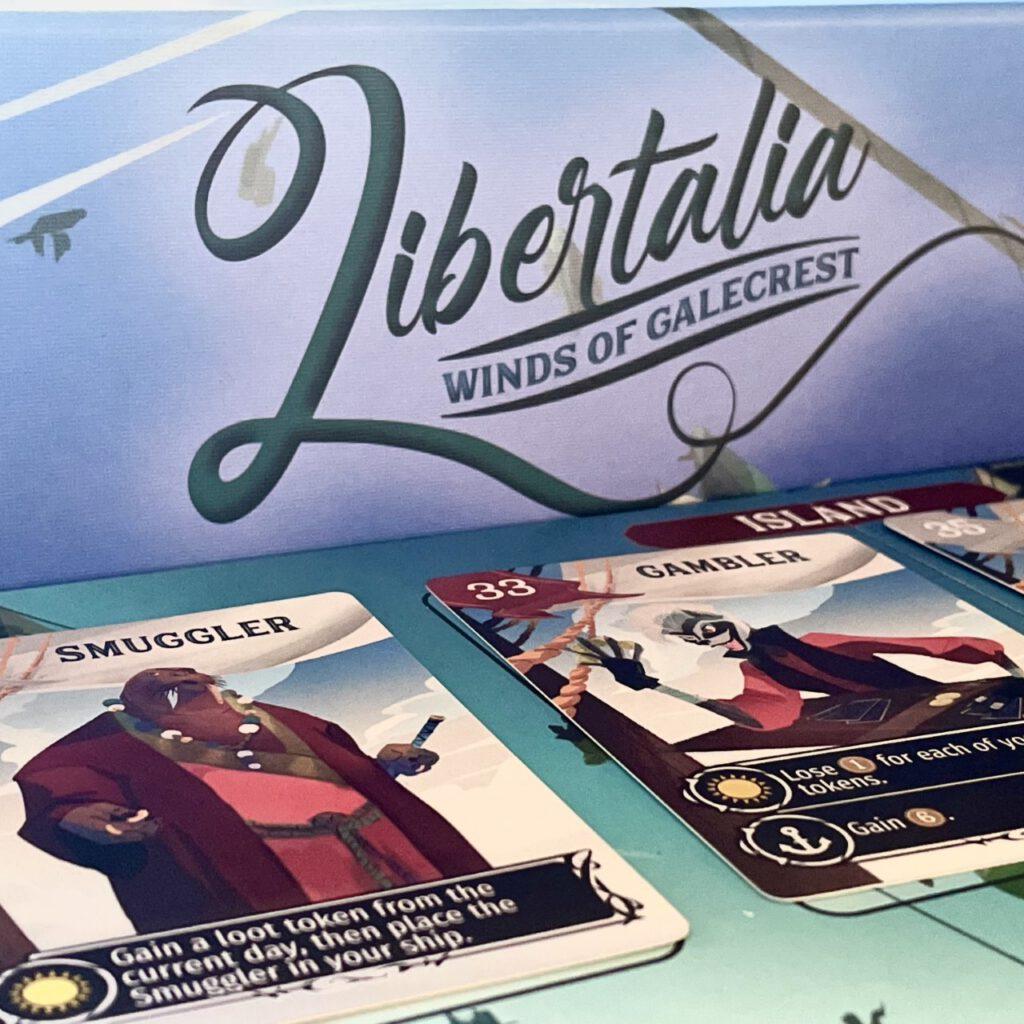 + Pretty components
+ Interesting mechanisms
+ A lot of interaction between players

This game has been kindly gifted to us for review purposes by Stonemaier Games.