In Jungle Tribe, you prove yourself as a future tribal chief by completing 3 dangerous quests in the jungle! 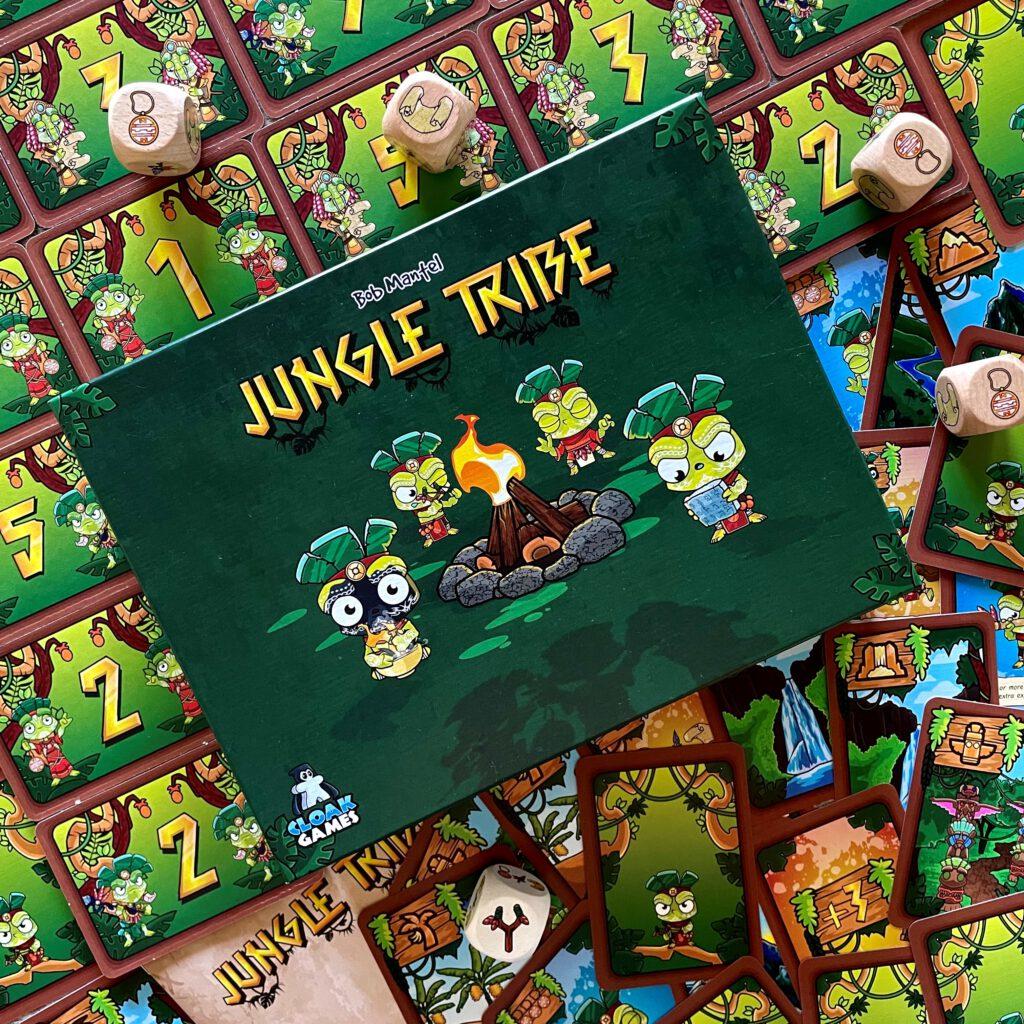 Jungle Tribe is a dice-/cardgame game where hand-management. plays a very important part. At the beginning of the game, all players choose 3 different 'quests' using the dice. These show certain types of jungle locations that you need in order to complete the quest. Once all players have 3 quests, the next phase begins. Each round you may play 1 jungle or experience card and as many special cards as you like. A quest runs from left to right, so you may only play locations that you need at that part of the quest. Between the jungle locations you can optionally play experience cards for extra points.

When a player completes 3 quests, the game is over and the other players may still complete their turn. You add up all the points and the player with the most points obviously wins the game and is the new chief! 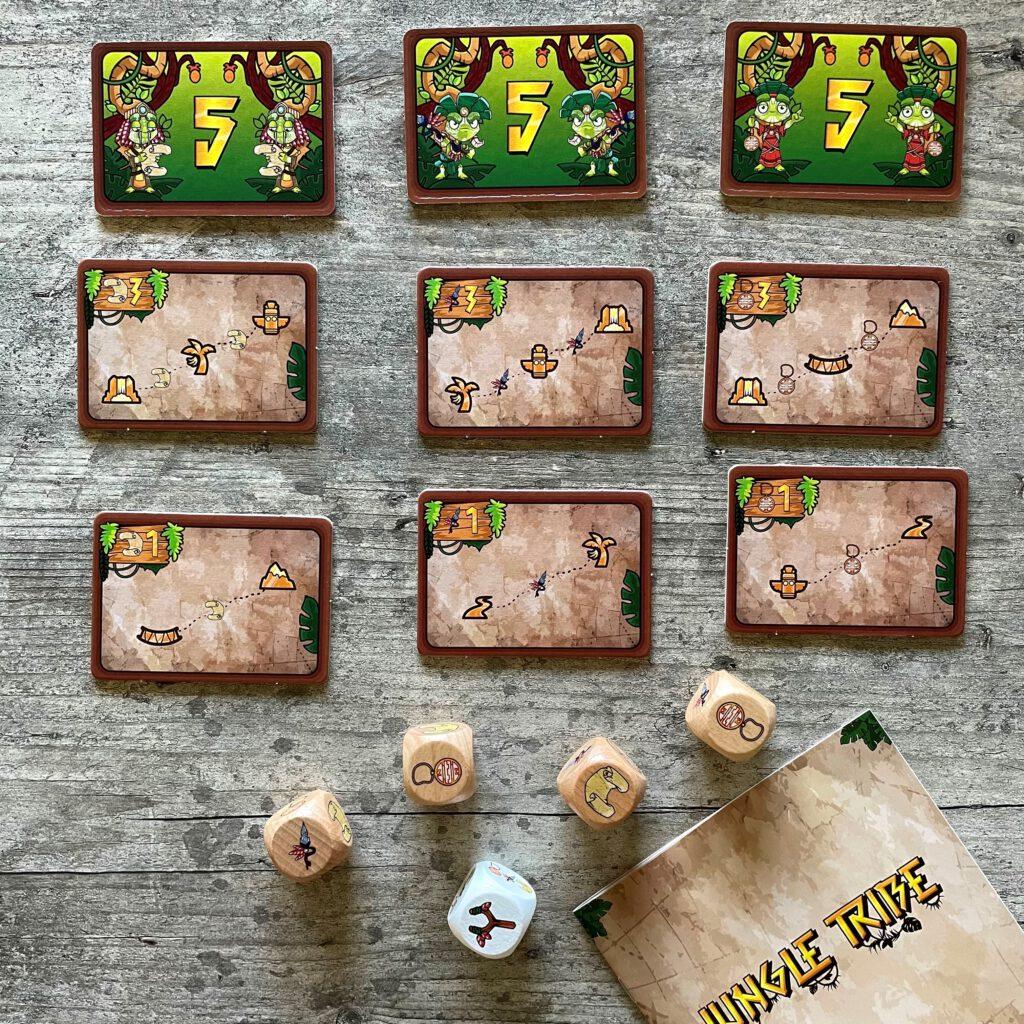 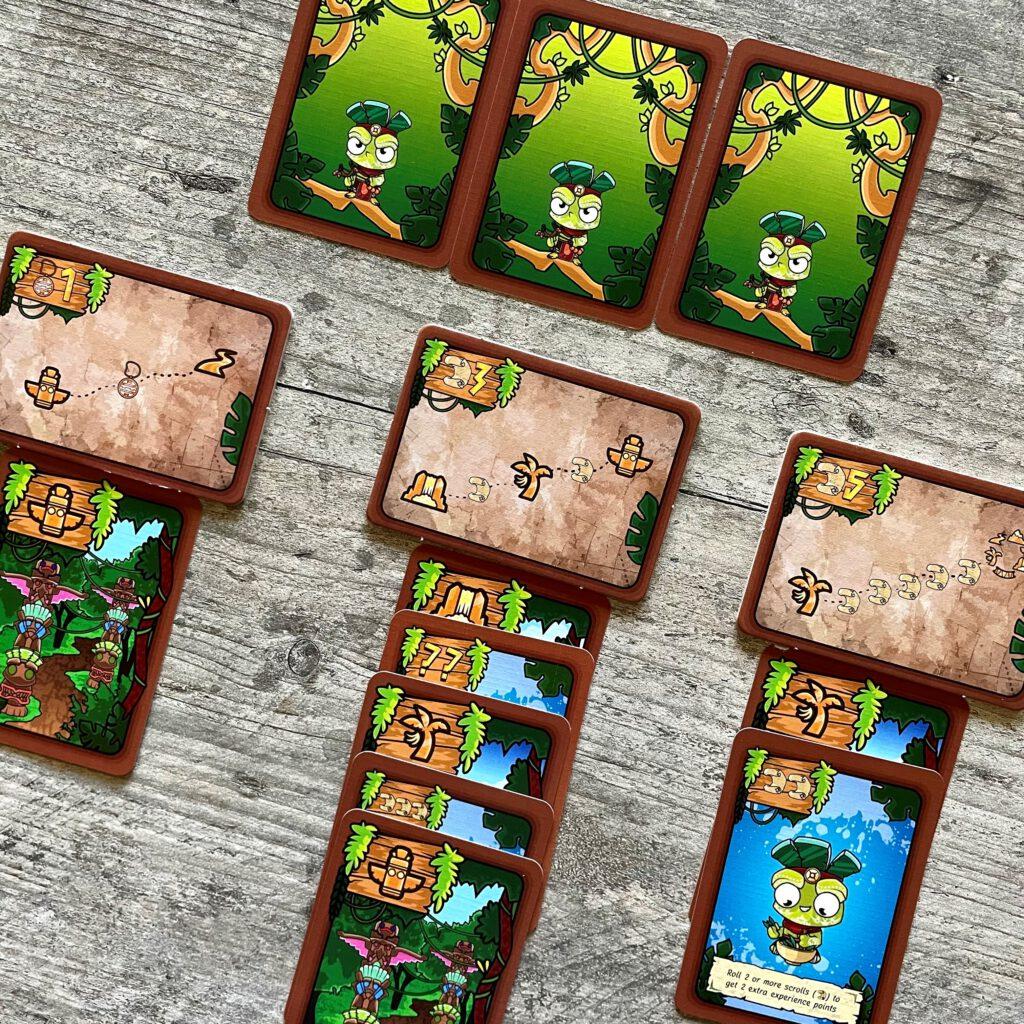 Before playing Jungle Tribe we were fairly skeptical. Often, smaller card games like this are not as suitable for us since we often play with 2 players. However, Jungle Tribe proved us wrong! This game is surprisingly fun, even with 2 players! We therefore immediately played it several times in a row.

Jungle Tribe is a game with very cheerful and fun artwork. The theme of Jungle Tribe is fairly innovative to us. In our opinion, the theme fits well with the gameplay. You are on a quest through a jungle and have to go from location to location. In between, you can also learn certain lessons. The large and heavy dice also add to the experience of the game. The artwork, the cards and the dice make for a fun gaming experience. Since we were very excited about Jungle Tribe, we made our own score sheets to use, because they aren't included in the game. You can find and print them on BoardGameGeek..

The game is divided into 2 phases, choosing the quests and completing them. We think this is a very nice approach. It also makes the game very tactical. You might think that a quest for which you get 3 points is better, but if your opponent has easier quests he will finish them much faster and you will lose points. Therefore you have to think carefully about which quests you take. However, we found the quests of 5 points too good. You only have to play 2 locations and you can optionally play experience cards. If you complete this 5 point quest without playing any experience cards, the other player doesn't stand a chance. It would have been better if more locations had been added to these 5 points quests, just like the 3 points quest. In that case this quest would also be more difficult to achieve.

We were very surprised at how much fun Jungle Tribe is with 2 players. Faster card games such as this often have a special variant for 2 players that quickly disappoints. Jungle Tribe plays the same with 2 players as with any other number of players. You have a lot of interaction with your opponent during the game and also have to pay close attention to what the other player is doing. This makes for a very interesting dynamic at the table. We don't really like to interfere with each other in games, but even we could appreciate the interaction in Jungle Tribe. You can play mean, but you don't have to be too mean.

So Jungle Tribe is fairly easy to learn and plays nice and fast. It's not a mega large and extensive game. So if you are looking for a smaller game with a funny theme and fun gameplay, this is really a nice game to consider, even with 2 players! 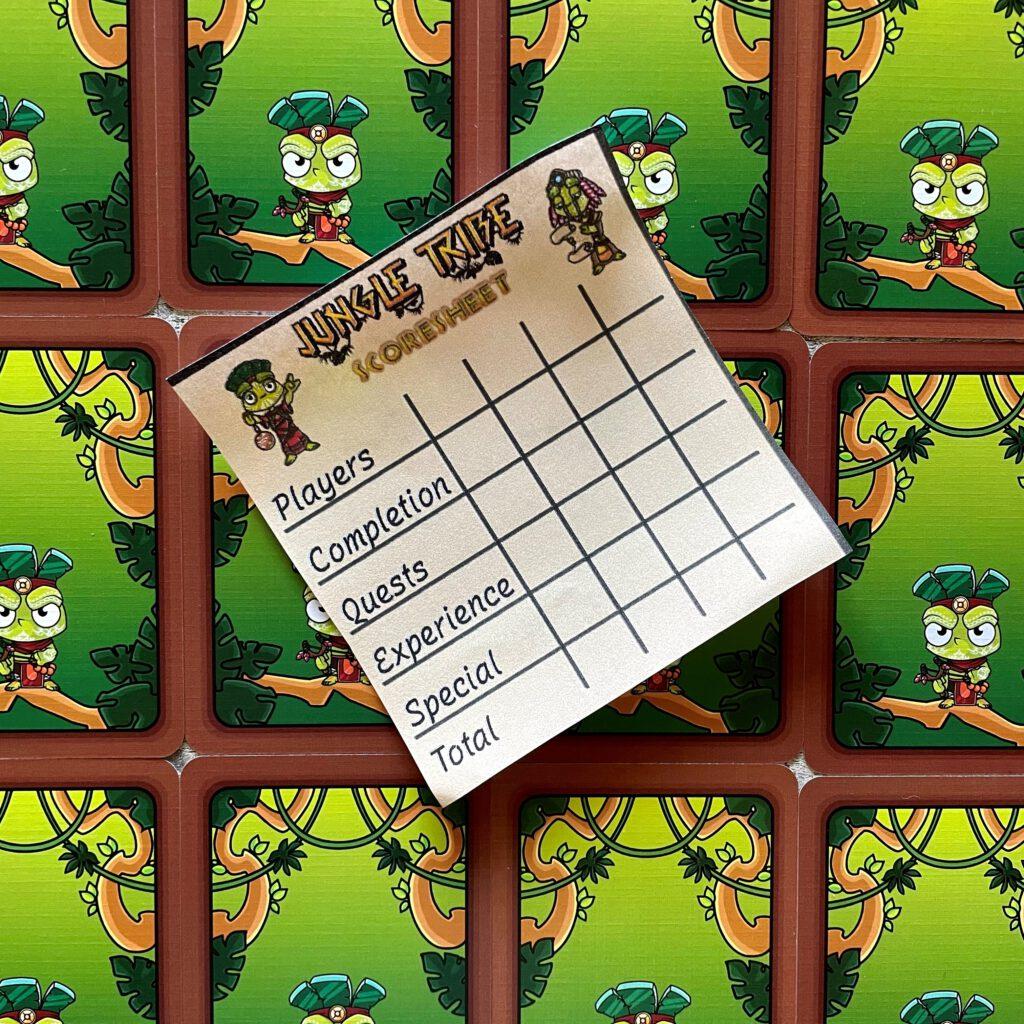 - 5 point quests are too good
- No scoresheets

Buy Jungle Tribe in the webshop!

This game has been kindly gifted to us for review purposes by Cloak Games.