It's time to build new cities in the valley of Everdell. Meet new creatures, build the best buildings and host the most fun events! 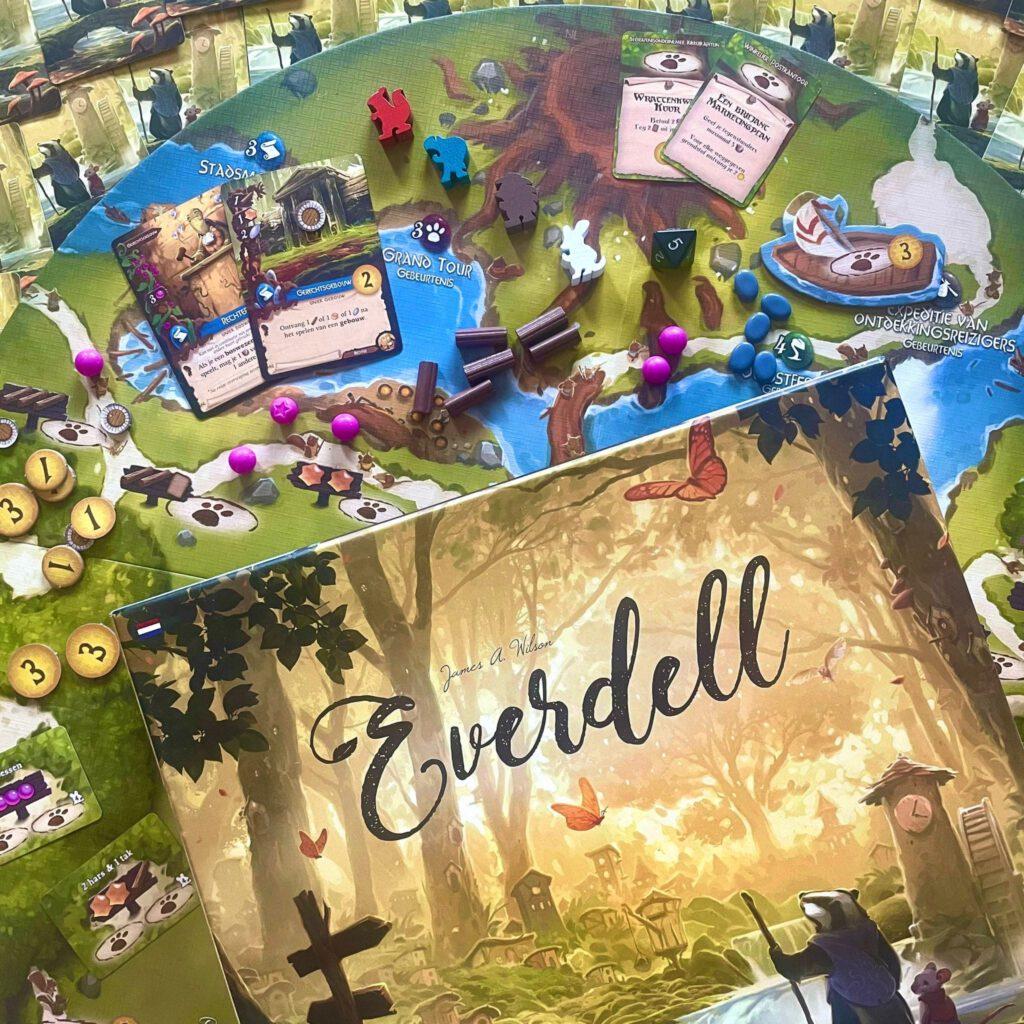 Everdell is a worker-placement game where cards also play an important part. In Everdell, you can place workers from which you receive building materials or other bonuses. With these building materials you can add cards to your city to score points.

Everdell is divided into 4 seasons, so 4 rounds. In a round you can take turns until you can't or don't want to take any more actions. In Everdell, you have a choice of 3 different actions during a turn. You can place a worker, play a card or prepare for the next season. With workers you can perform many actions, such as collecting building materials, taking cards or organizing events. These events give you bonuses at the end of the game. Cards are forest creatures or buildings that you can play in your city, provided you have the necessary materials. Each building has an associated forest creature that you can play for free if you already have the building in your city. So a forest creature only costs something if you play it without having the corresponding building in your city.

After each season you will receive extra workers for the next season. You may also have certain production cards in your city that you receive materials from. So each season you send your workers out and place buildings and creatures in your city. At the end of the 4th season you add up all your points. These are points for cards, events, etc. The player with the most points wins the game! 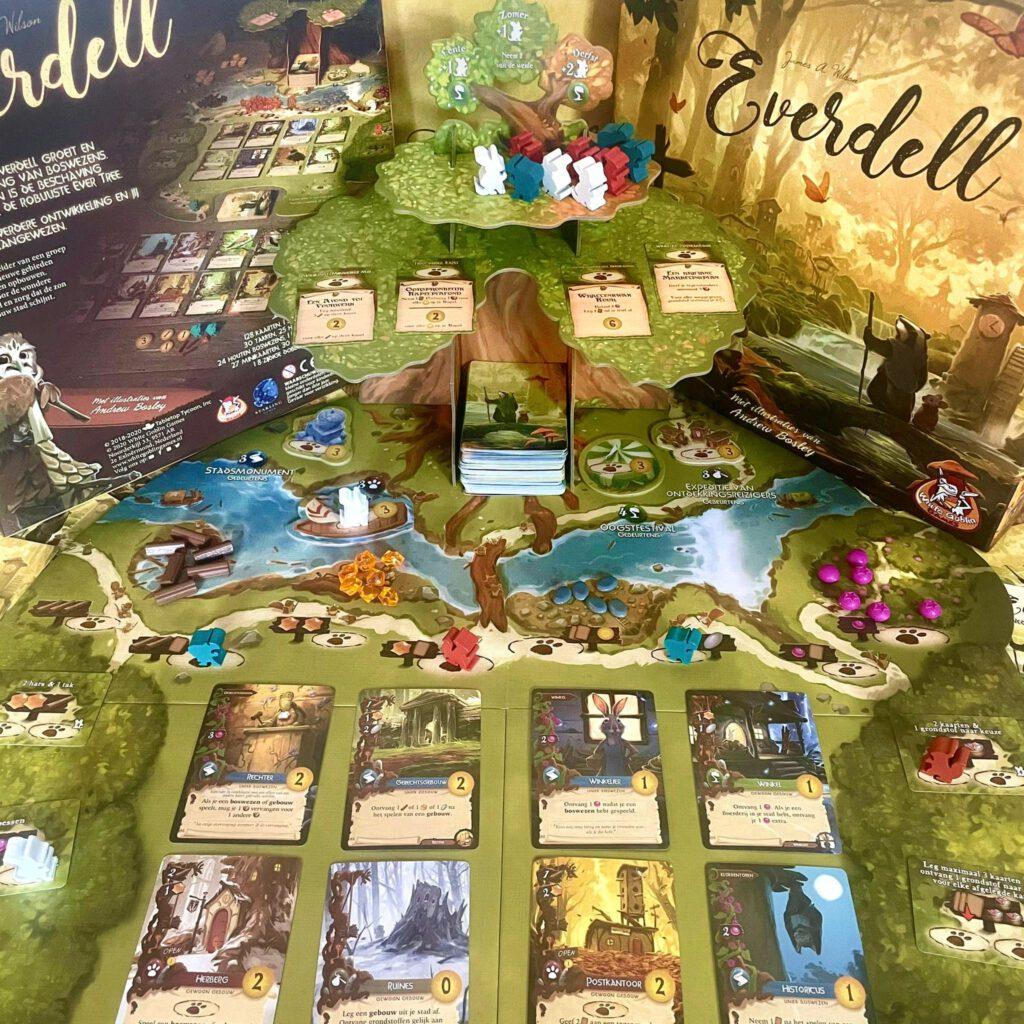 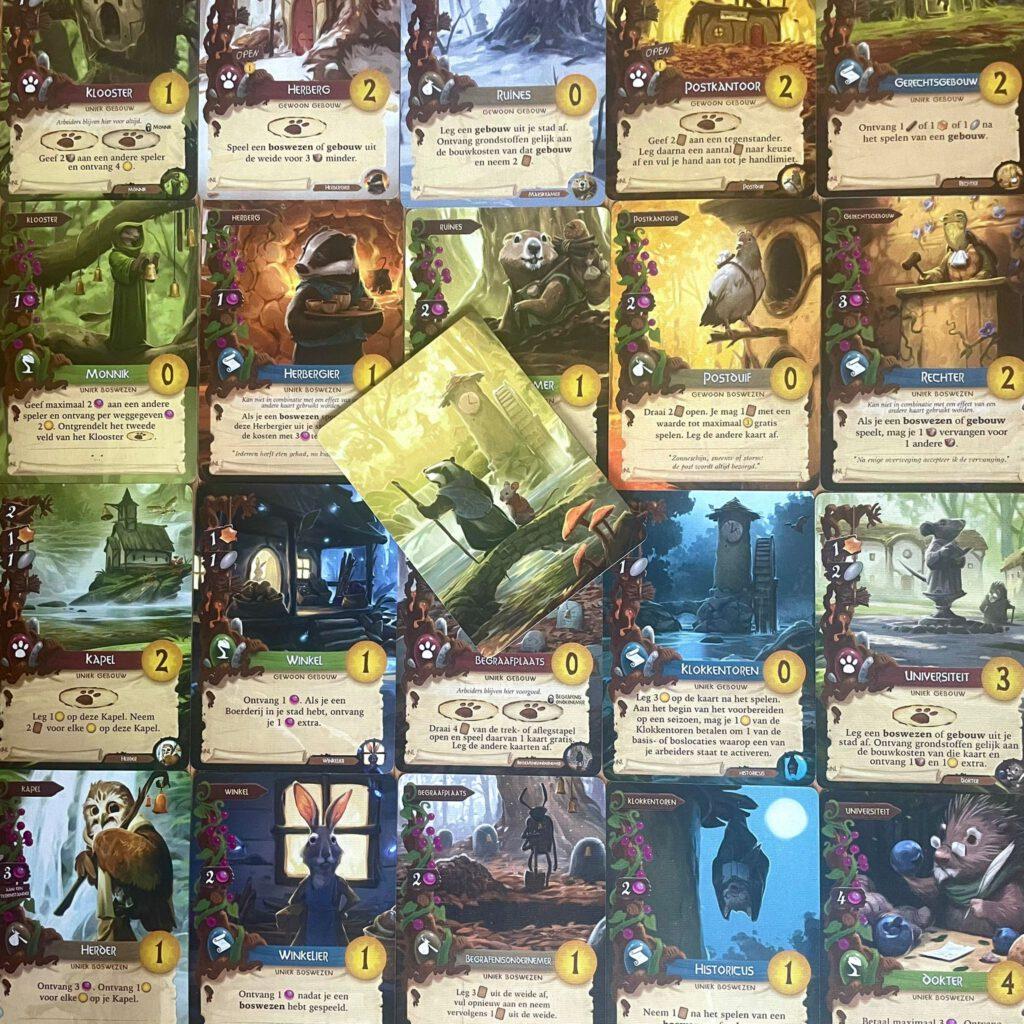 Everdell is definitely a game with a WOW factor. The theme, components and artwork are beautiful. The 3D tree completes the whole experience. If you want to make it even more beautiful, you can also buy upgrades, like resource baskets! Not everyone agrees that the tree is a useful addition, but you can of course just leave it out and place the cards and workers separately next to the board.

If you have played worker-placement games before, this game is not difficult to learn. The rules are clearly explained and you will be able to start your first game quite quickly. During the first game you don't know all the combinations yet and you probably won't be able to play it the best. This makes it a game you can learn well and get better at.

We like that Everdell is divided into seasons, so you always try to get the most out of a turn. It also gives you the opportunity to build up your skills during the first seasons with the limited number of workers you have at that time and use the benefits of this in the later seasons. Unfortunately, this makes you very dependent on the starting cards you get. You have to be pretty lucky in the first rounds if you want to build up well for the later rounds. For us, this sometimes felt a bit unfair because your opponent could have already built a good 'engine' while you only had 2 buildings in your village.

Everdell is a game that doesn't have a lot of interaction. You are mainly concerned with your own city. It is certainly thought of, because there are also cards in the game that you can use to interfere with your opponent. For example, there is a forest creature that you can put in your opponent's city which will get them minus points. Because you can only visit some locations once, it is certainly important what your fellow players do. The lesser degree of interaction does not bother us.

In Everdell, the meadow is a kind of shared extra hand. All players can play cards from it, a rather unique and fun mechanism. This gives you just a bit more options than just having your own cards and you can also interfere with other players this way. The only downside to this is that there is no standard way to refresh the meadow. If there are no good cards for you in the meadow you are dependent on other players taking cards from it. Especially in a two-player game this can be annoying when neither of you needs any cards from the meadow. The game can then sometimes get a bit stuck.

Every game of Everdell feels very different, as you have to work with what you have in your city. Therefore, it can happen that you can organize many events, but other times you play for many points at the end of the game. So you can't really use a strategy, because the possibilities are always different. The replayability of Everdell is in that sense very high. After a while you have seen all the cards and know approximately what is possible. At that point, Everdell becomes more of a game that you grab from your shelf every now and then instead of a game that you play every day. We don't mind that and therefore think Everdell is a must-have in your collection. We are very curious about the expansions and whether these will give the game that extra depth. 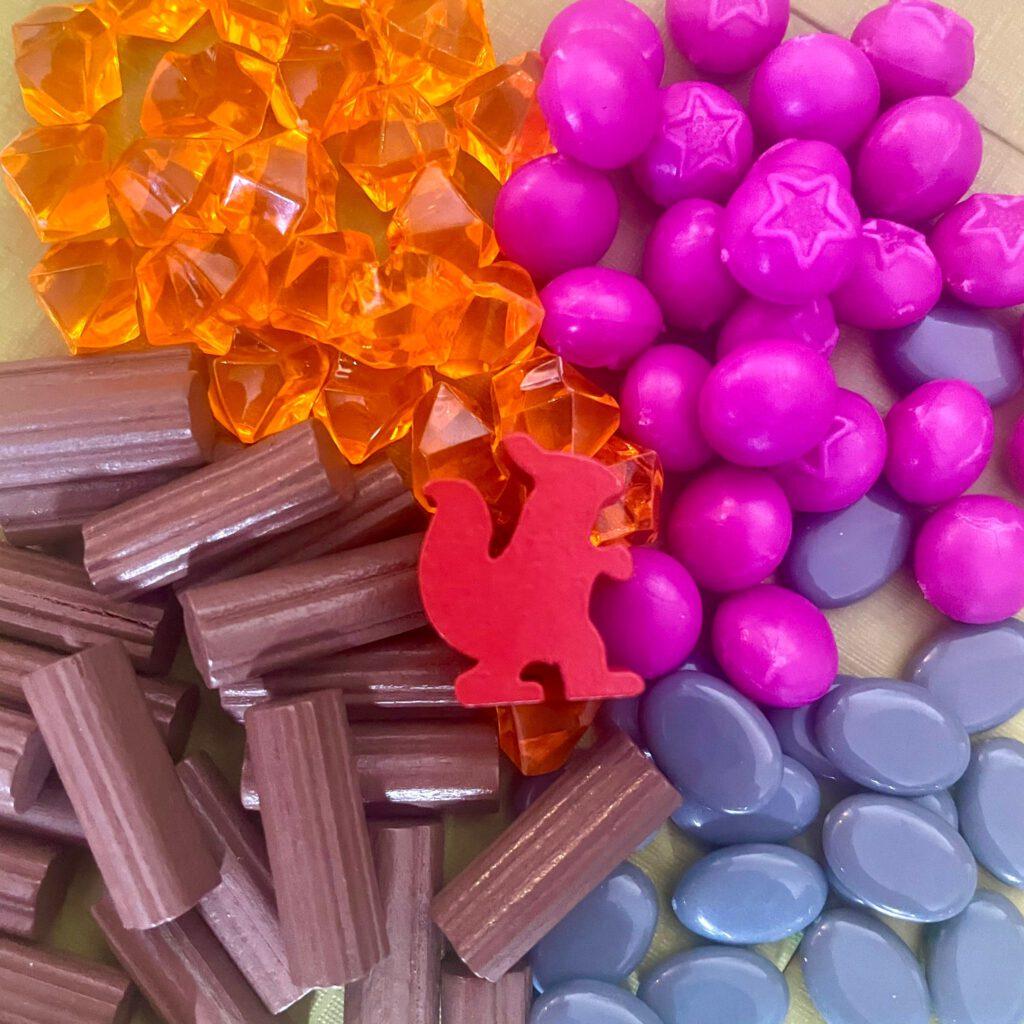 Buy us a cup of coffee
PrevPreviousReview: Cascadia
NextPreview: ThreetaleNext