In 7 Wonders Duel you will develop a thriving civilization and try to defeat your opponent. 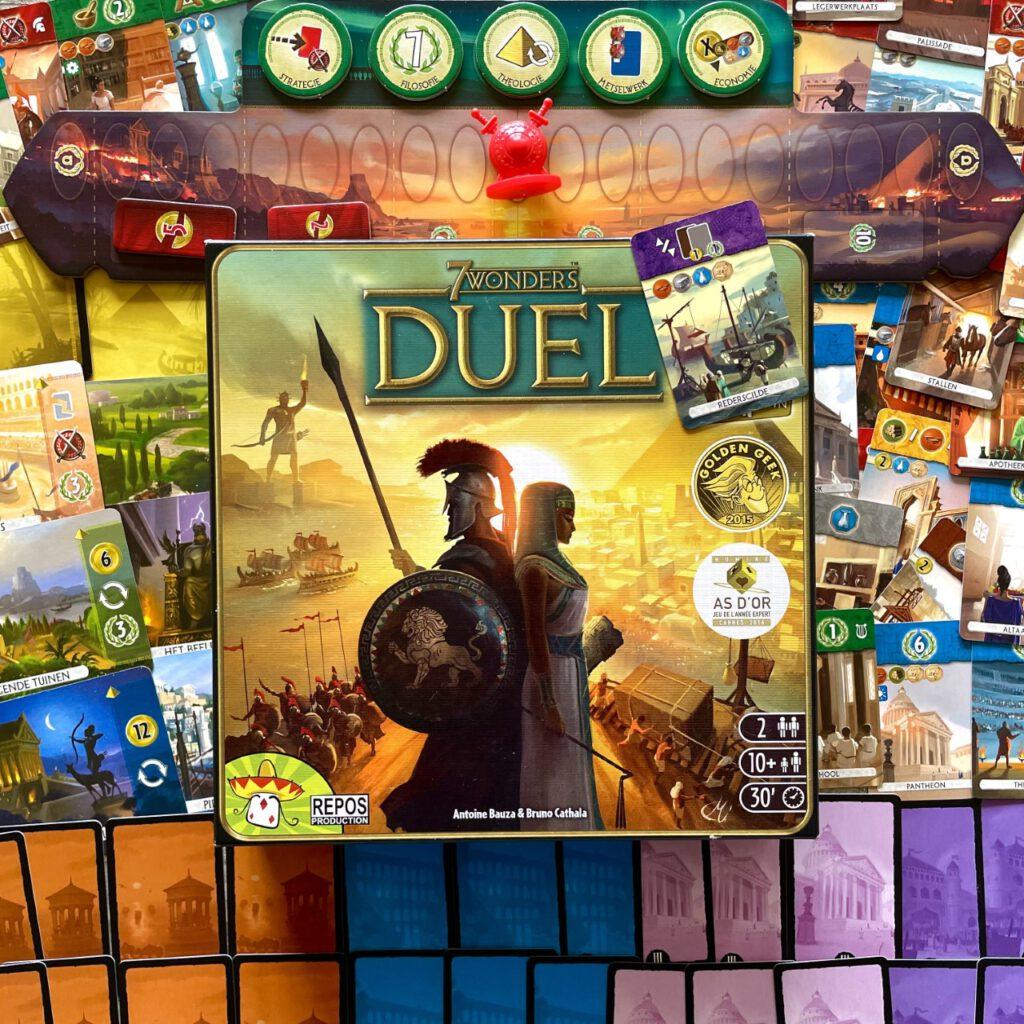 In 7 Wonders Duel, you and your opponent will try to build a successful civilization in different ways. You can do this by collecting goods to gain military power, discovering new scientific techniques or collecting enough points. There are therefore 3 different ways to win this game.

The game takes place over 3 ages. In each age, you place the cards belonging to that age on the table in a certain pattern. That pattern is shown on a player aid. At the beginning of the game each player also receives 4 wonders. After setup, you take turns taking a card, but you may only take cards that are not overlapped by another card. Therefore, you start taking cards from bottom to top. Cards can be free but often cost money or goods. There may be 2 ways to buy a card. In addition to money and goods, you can also pay with symbols. These symbols must be on previously purchased cards, you may then take the card 'for free'. When all the cards have been used up, the next era begins with another card layout.

Brown and gray: These cards are resources. You use resources to buy cards. For example, another card may cost 2 wood. You must have 2 wood in your city to take this card. You may only use each good once per turn but you may also buy a certain resource with 2 money. It may therefore be a good idea to buy or take some goods at the beginning to make things easier later on.

Yellow: Yellow cards are commercial buildings. These can have different functions. For example, a yellow card can just give money but it can also, for example, make it cheaper to buy resources with money.

Red: These buildings increase your military power. If you pick up a card with a military symbol, you move the pawn so many spaces in the direction of your opponent. When the pawn reaches your or your opponent's city, the game is over and the one who did so wins.

Blue: These civic buildings are worth points at the end of the game.

Purple: These purple guild cards do not come into play until the 3rd age. For these cards you get money and score points at the end of the game.

Instead of putting a card in your city, you may use it to complete a wonder. If you decide to do so, you do not pay the cost of the card but of the wonder. Wonders can get you bonuses immediately or at the end of the game. A maximum of 7 Wonders may be built. So if you already have 4, your opponent may not complete his last one!

So there are 3 different ways how the game can end. You can win on military power, scientific development and points. If the game ends with the last card being taken in age 3 then all players add up the number of points they have in their city. The player with the most points then wins the game! 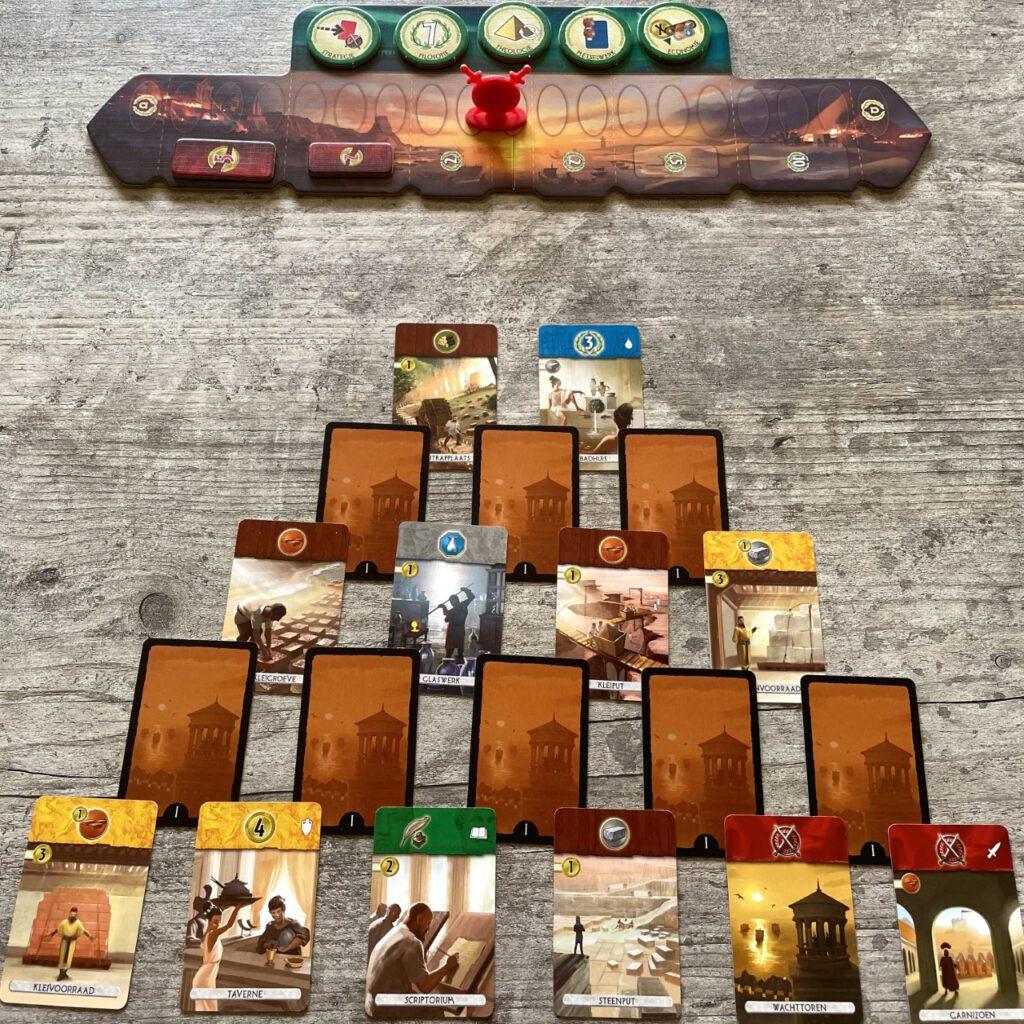 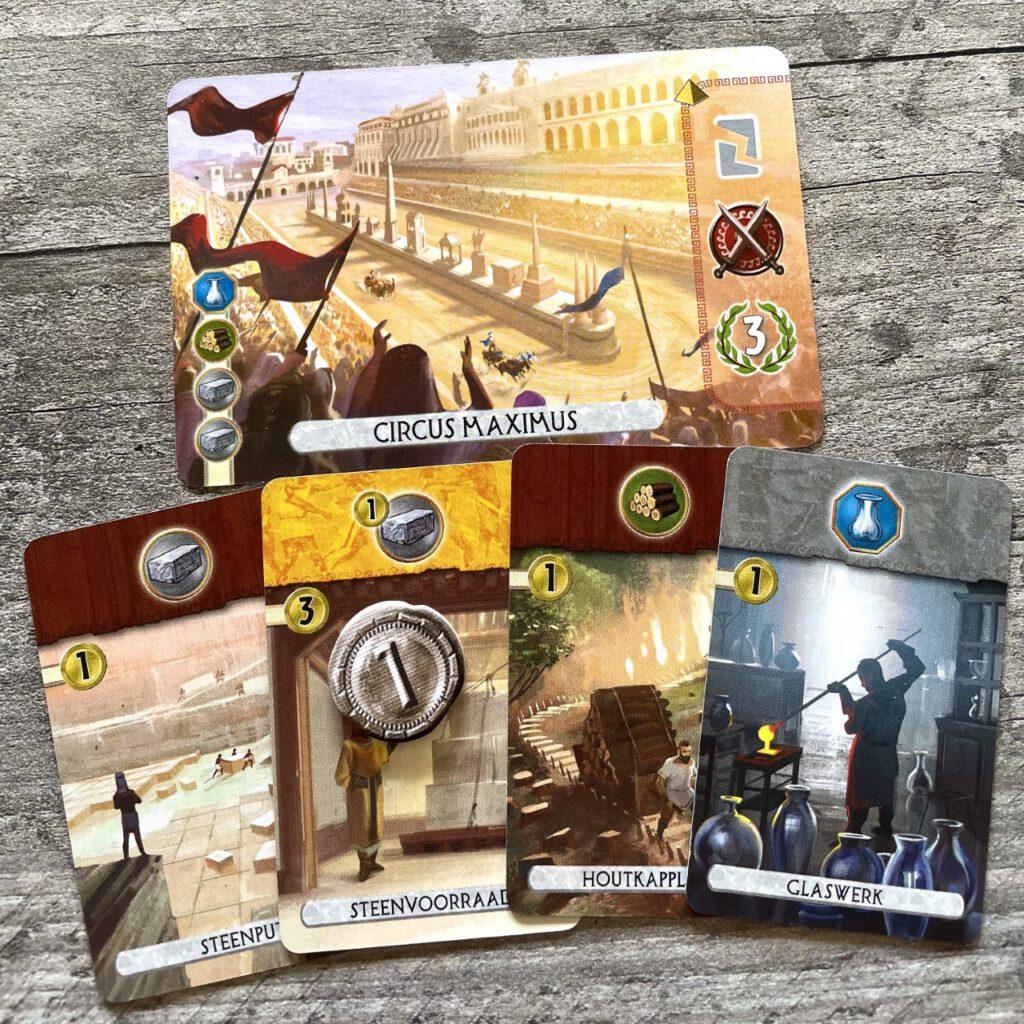 Since we almost always play with 2 players we couldn't resist purchasing 7 Wonders Duel. We were told by many people that this is their favorite 2 player game. After we received the game we immediately played it a few times. We also understood very well where the hype came from.

The theme of the game has to suit you, as it is about ancient times. The theme is very well implemented in the game. The cards have very nice artwork with matching images. The division into 3 ages makes the game different. In the first age you are more concerned with building up while in the 2nd and 3rd age you are really more concerned with collecting points or military/science power. The wonders give you a nice goal in the game and are also different every time. We also think the wonders are very well balanced, it is certainly not the case that you win right away if you have all the wonders, but they do give an interesting bonus.

7 Wonder Duel is also a good "gateway" game. This means that it is not a very simple game, like Bravo!, but it is also not an extremely complex game, like Bonfire. This makes it a perfect game to introduce fairly new players to boardgames. This is because the essence of the game is simple because you are always just taking cards. To win and become good at this game you are going to need a good strategy. This thinkiness does make it more complex than it first appears.

We also like the fact that you can win in different ways, but we have never been able to win with military power or technology. We have had a number of games where one player really went for military power. If the other player realizes this and also tries to collect some military power it is almost impossible to win this way, the same goes for scientific development. Perhaps they could have made these 2 ways of winning a little easier. It never really pays off to go for this now, which is why we just play every game for the point victory.

We think 7 Wonders Duel is really a very good addition to our 'Spellenplank'. We agree that this game really can't be missing from your collection if you often play with 2 players. The theme and the way this game plays nicely make it perfect for any occasion. However, we are already looking for expansions because in the base game we were constantly just collecting points in the same way. 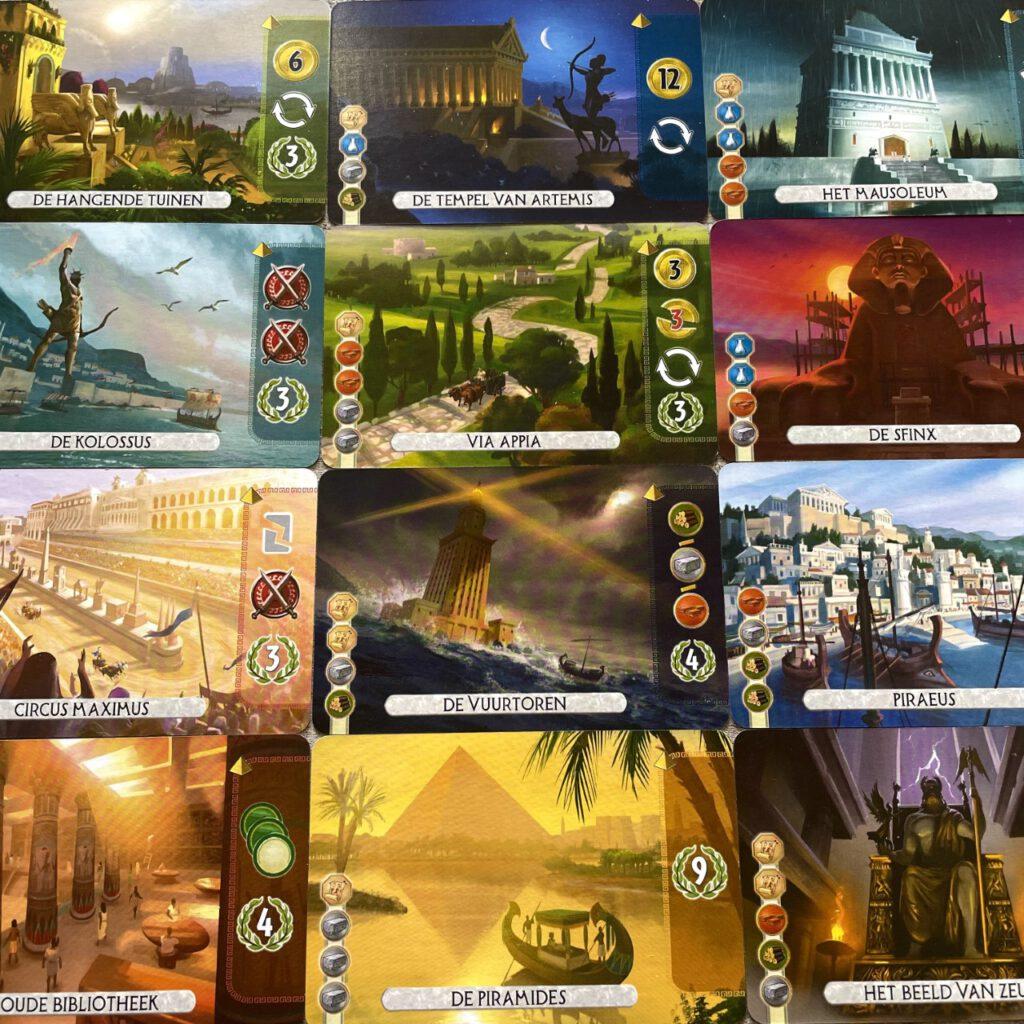 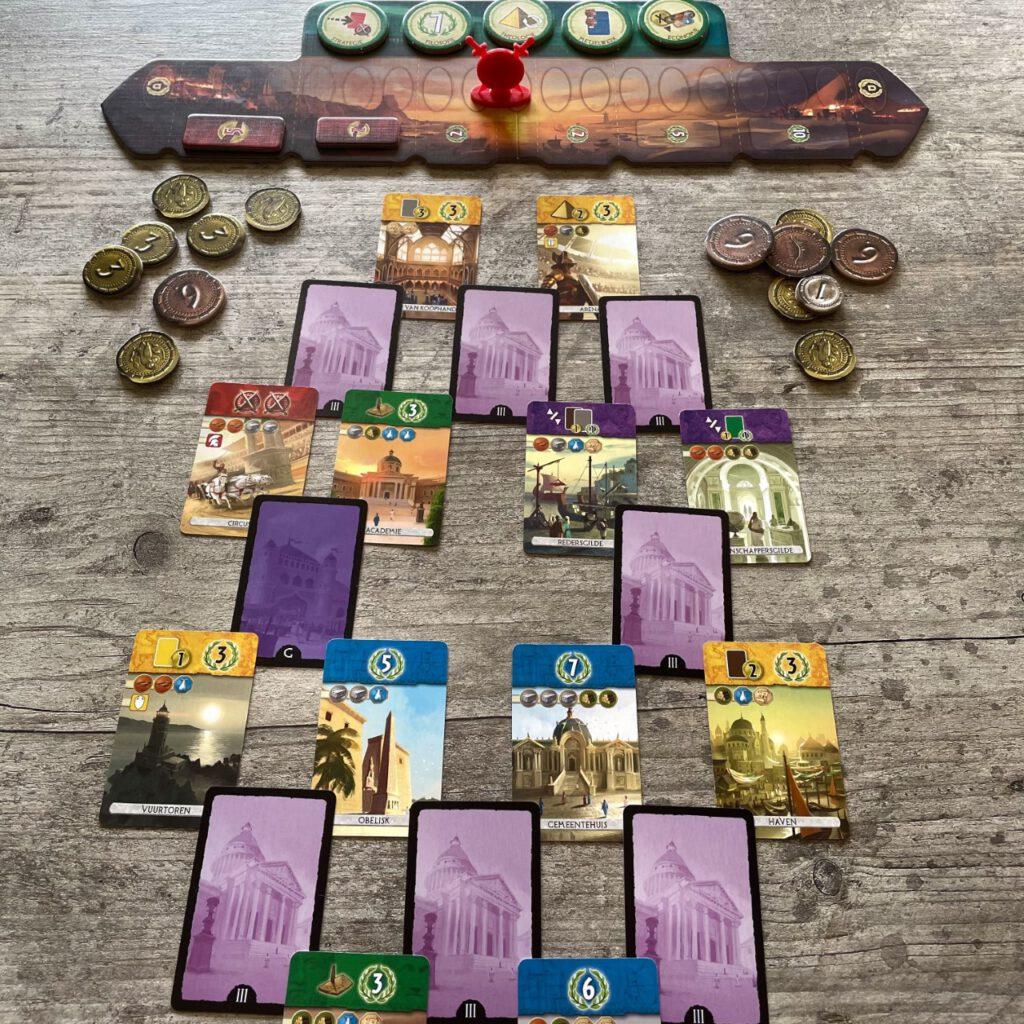 7 Wonders Duel can only be played with 2 players. This game really should not be missing from your collection if you often play with 2. It is a pity that there is no possibility to play it with more people, so you can never take this game out if you are with more than 2.

Buy us a cup of coffee
PrevPreviousReview: Sagrada
NextReview: Paladins of the West KingdomNext