In Terraternity you are going to save the world. You do this by making countries carbon neutral and making the world a sustainable place! 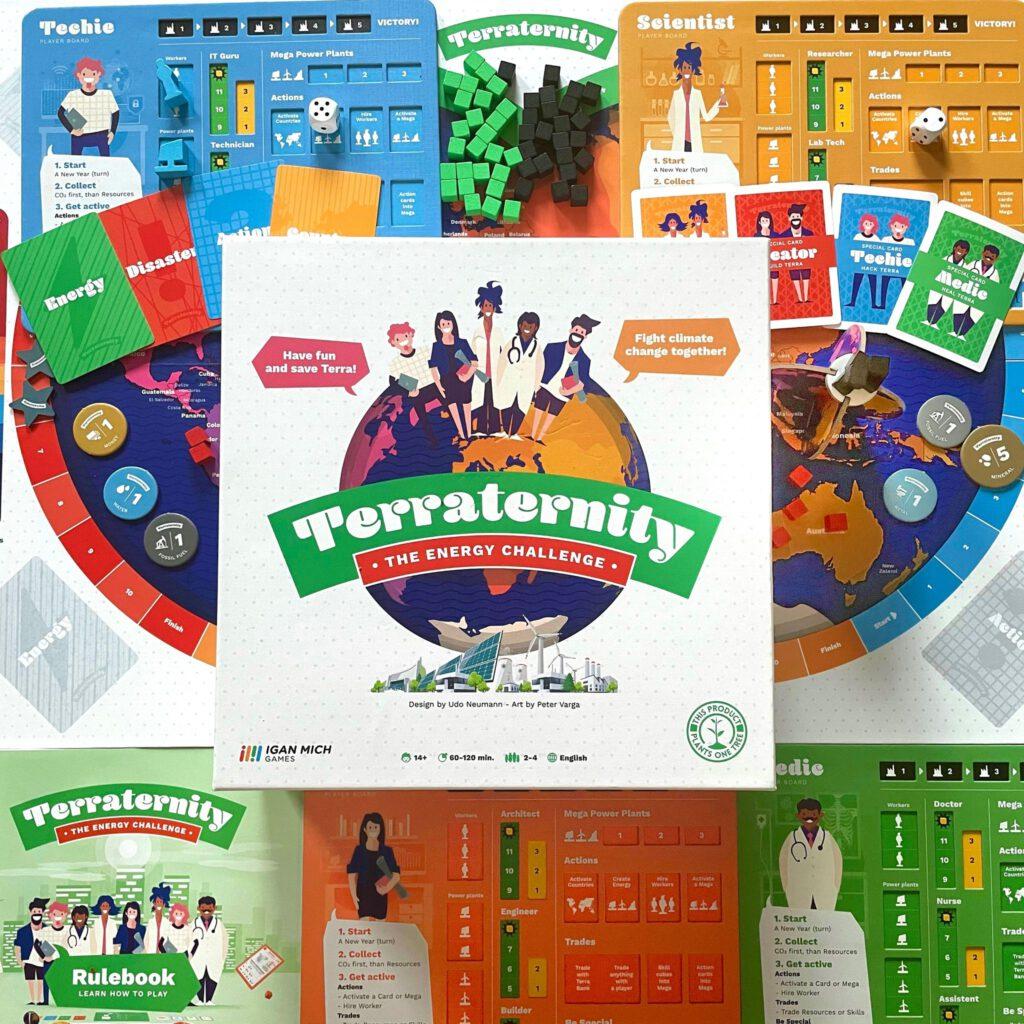 Terraternity is a euro game with several mechanisms, the main ones being card-drafting,  worker-placement and dexterity. In Terraternity you get to to save the earth. You do this by making countries carbon neutral. Watch out, however, that you don't get too enthusiastic when activating countries and produce too much CO2 which causes a disaster.

You have a number of actions you can do each turn. You start each turn by collecting CO2 cubes from your active countries that are not yet carbon neutral. You must then place these cubes on the Terra globe. You may not touch any other cubes. If the cubes fall from the tower, a disaster will occur. The disaster cards show exactly where the disaster will occur. You then drop a number of red cubes on the map and all countries in the area will be negatively affected. Also, the game is immediately over after 5 disasters, so make sure this doesn't happen!

To make a country carbon neutral you have to build power plants. These power plants offset the country's own CO2 emissions. Power plants do cost time, resources and builders. The first player to make 5 countries CO2 neutral wins the game!

Besides playing against each other, you can also play cooperatively. You then work together to make 8 countries CO2 neutral. This is still quite difficult to achieve! 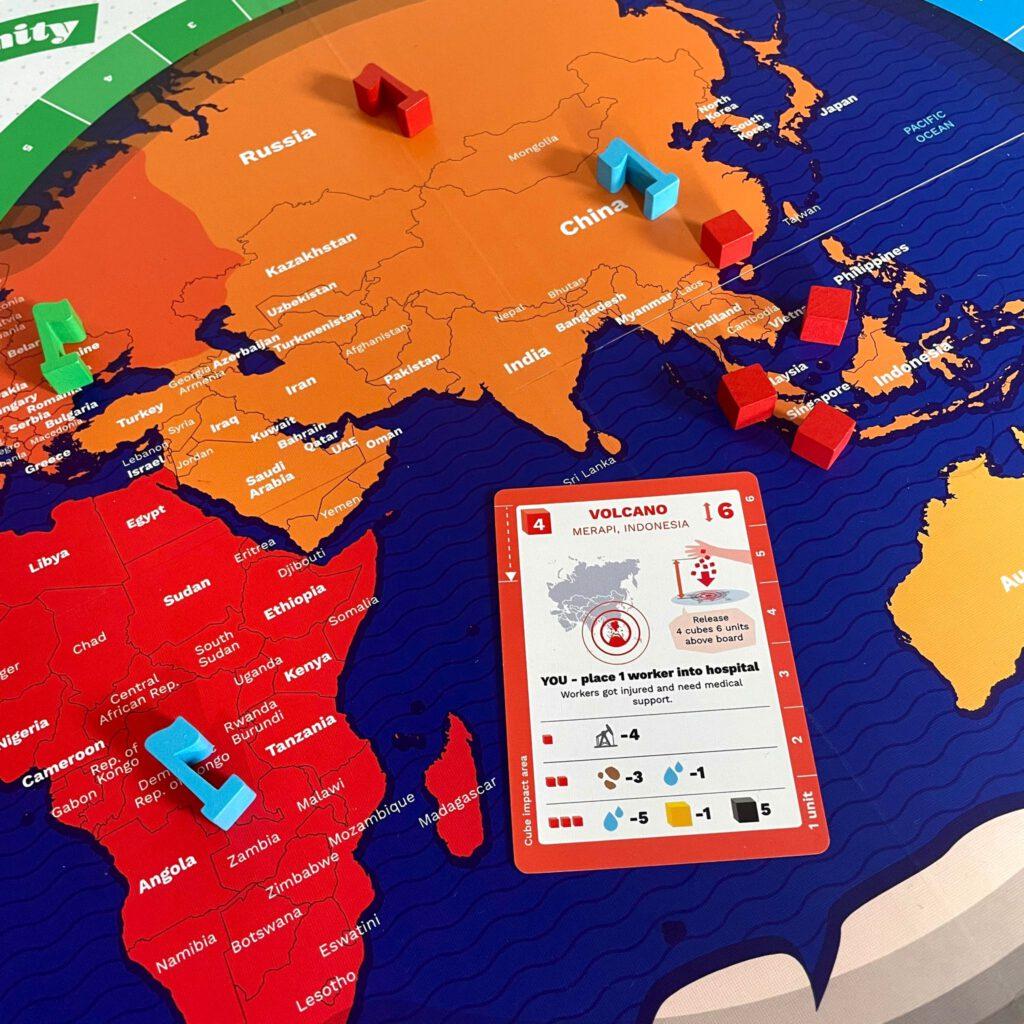 Terraternity is a game that we have really believed in from the beginning. Not only because we thought the gameplay looked fun, but also because of the message the game wants to convey. Terraternity is a game about sustainability. The message that the game contains is also very important to us and it is nice to see these kinds of important topics reflected in board games. We think this is one of the most important topics of the moment. All components in the game are made as sustainable as possible and they are even working on a sustainable insert. In addition, for every copy sold, a tree will be planted in your name!

The gameplay contains multiple mechanisms that combine to create a fairly complex experience. We really like the fact that there is a dexterity element to it. You're really on the edge of your seat every time you have to add cubes. The way disasters happen is also innovative. If you get the hang of the game it is pretty clear what you can do each turn and what you need to win. However, the rules of the game are still difficult to understand when you play for the first time, but we have already discussed this with the publisher and this is going to change. The rules of the game will be much more streamlined.

We think a strong plus is that Terraternity is a very informative game that you can learn a lot from. You learn a lot about sustainability, but also about topography. On most cards there is also a QR code which brings you to a site with even more information about the card. We think this game can also be a great educational game for children (with some modifications). We can really see this being used in classrooms.

Terraternity will appeal to many different audiences. There is not only a euro game, but also a card game that contains important elements from the euro game in a more compact and faster game. In addition, the euro game contains a competitive variant and a cooperative variant. We are huge fans of cooperation during games, so we are very excited about the additional variant. Because of the different types of variants, Terraternity will appeal to a large group of players.

The only downsides we can think of are that there are a bit many possible actions. Sometimes the gameplay feels a bit clunky because of this and not every action is very streamlined. All these actions do make it a somewhat complex game, but personally we would like it more if it was a bit lighter. If you like heavier games, this could actually be a positive! We gave this feedback to the publisher and they already said they are working on ways to tackle this. There are ideas to make difficulty levels, so you can gradually increase the amount of complexity. This will also make learning the rules a lot easier.

All in all, Terraternity is a challenging game with a hugely important theme. Not only is it a fun game to play, but it also contributes to raising awareness about climate change, and you can feel that in the gameplay. We think it is very clever how this is done. There are perhaps a few points in the game that could be more streamlined, but it is after all a prototype. We are in close contact with the publisher of this game and have already given our feedback. They were very happy with this and immediately went to work to incorporate it. This shows us that they also have an eye for the players and that they listen to them. That makes us very excited for the Kickstarter campaign! Be sure to keep an eye on it from October 5th!

This game has been kindly gifted to us for preview purposes by Terraternity. This preview was created using a prototype of the game. The final version may look different.