In Goldenstar the Galactic Tournament, you play 2 heroes who compete with other heroes to win the Goldenstar! 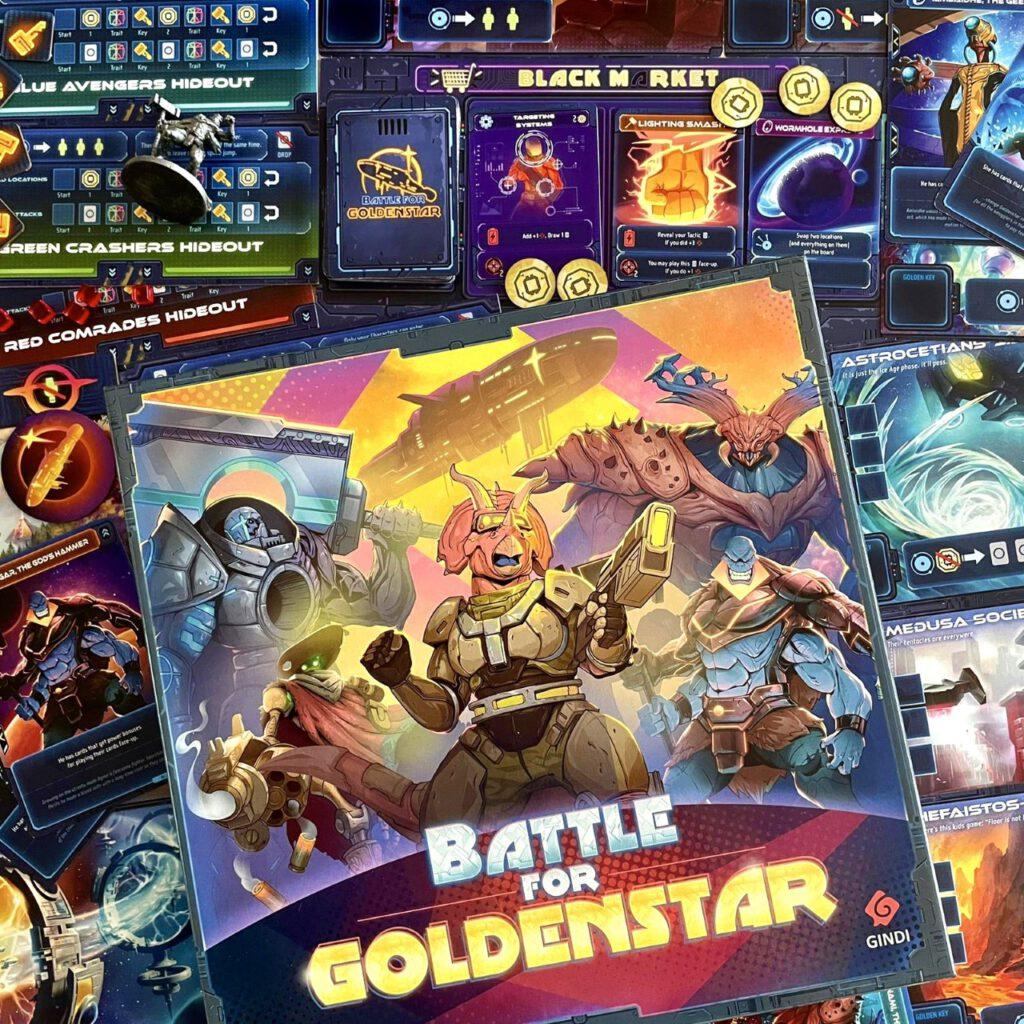 Goldenstar: the Galactic Tournament is a fighting game where you try to get influence over certain areas and build a deck to become stronger.

You begin by choosing 2 heroes. These heroes all have their own strengths and decks which makes them interact in different ways. You use heroes to fight, score points and claim the Goldenstar. You can expand your deck by buying new cards with coins. Each card can be used in multiple ways, such as for attacking, defending or something special.

In addition to deckbuilding, you can expand your influence on the different worlds you can visit. This also gives you bonuses for your attack or defense. To win the game you will have to claim the Goldenstar, but you can only win it if you can win all attacks for one round. That may sound easy, but this can be very challenging! 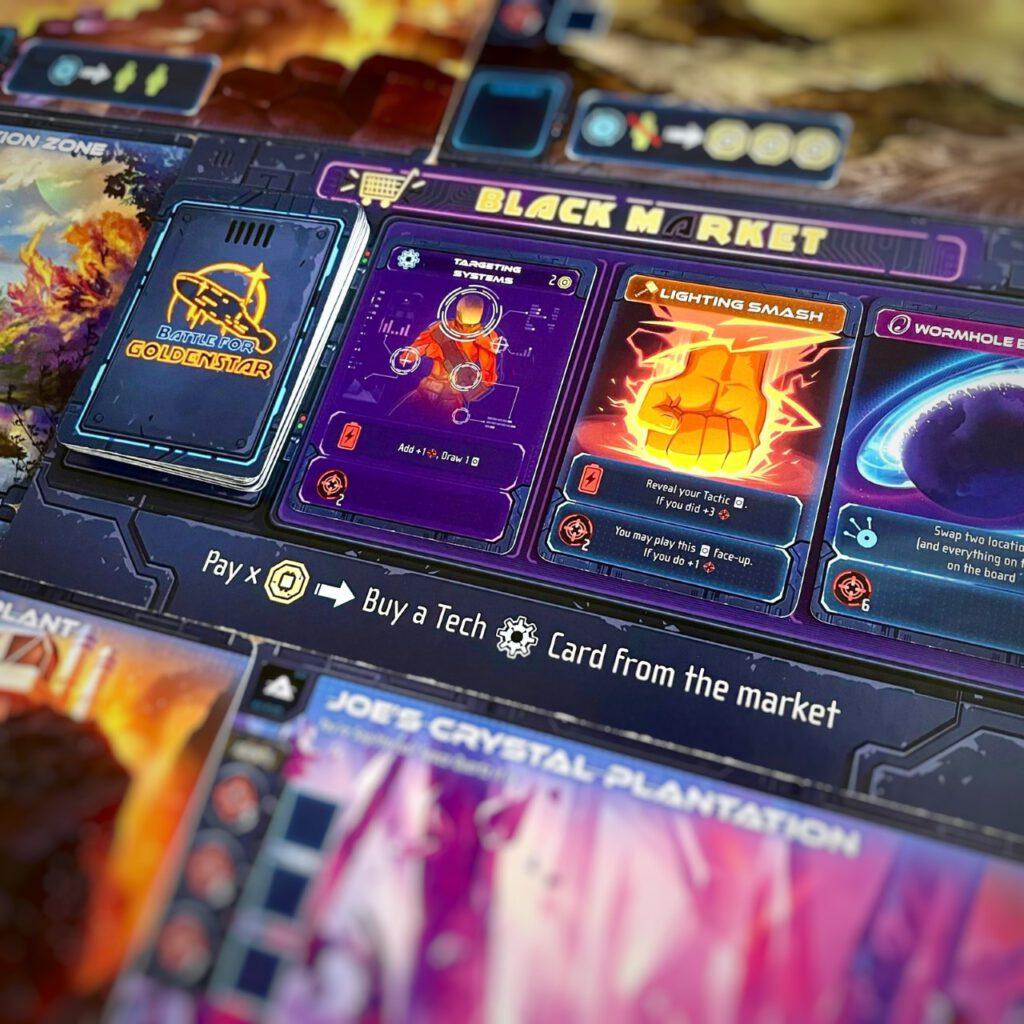 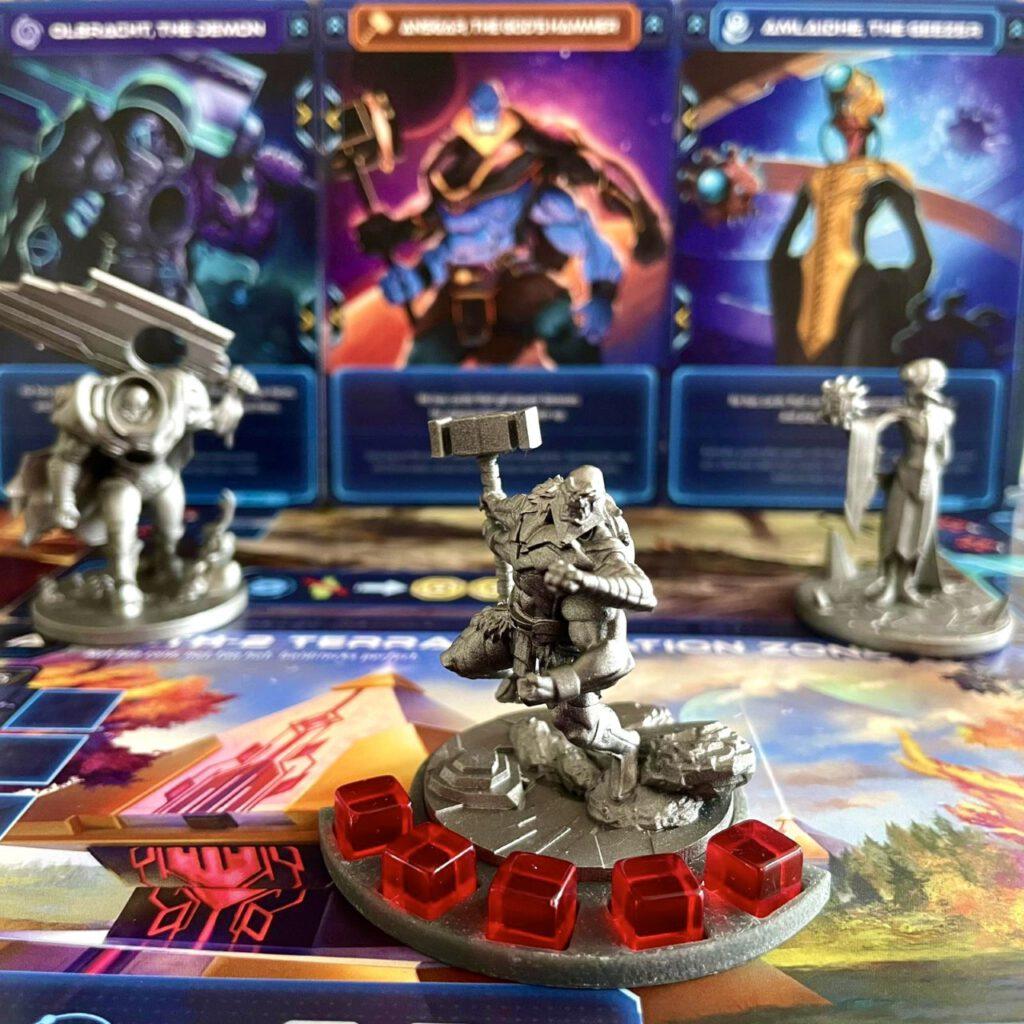 Goldenstar is a game with pluses and minuses. Big pluses as far as we are concerned are the fun and cheerful artwork, the special miniatures and the asymmetrical deck building which always appeals to us. These were also the elements that initially caught our attention. Because let's face it, the colors and the miniatures are definitely eye-catching!

Goldenstar: the Galactic Tournament will not appeal to everyone because of its theme. Personally, we do think the game looks very nice. Especially for fans of miniatures Goldenstar is a great discovery. Because the miniatures that come with this game are incredibly cool! The artwork of the game is colorful and fits well with the theme. As far as we are concerned, it is very well done!

Something else we noticed about Goldenstar is the asymmetrical deck building. Each player plays a duo of characters. Each character has their own cards and powers. This makes the game asymmetrical. We are big fans of this approach that we have seen before in Imperium Legends. In Goldenstar: the Galactic Tournament you also get 2 characters with their own cards! The different characters are nicely worked out and very varied. By making various combinations it is also good for the replayability. We were very excited and curious about the deckbuilding. Unfortunately, the deckbuilding in Goldenstar felt rather limited. We did not feel that this mechanism, which we were so enthusiastic about, was shown to its full potential. Where we expected deckbuilding to positively surprise us, this part actually disappointed us. Often there were other actions to do that were better at the time, which made us focus on other game mechanics such as area control and combat.

One game mechanic that comes up a lot in Goldenstar: the Galactic Tournament is fighting. Personally, we don't like this kind of negative interaction in games. Of course, it's part of the game, but we always think it's not fun to directly interfere with each other. The game revolves mainly around the battles, which puts the emphasis on this kind of negative interaction. The rest of the game elements were therefore less effective. In this respect, Goldenstar is perhaps not the most suitable game for us. However, we can imagine that this is exactly what appeals to others. The fighting in Goldenstar is indeed well done and certainly entertaining.

Goldenstar: the Galactic Tournament is a simpler game. Despite the fact that the rules in the prototype were still unclear at times, Goldenstar will certainly not be the hardest game in your collection. In some areas, we expected a little more depth in the game. We regularly sat at the table asking questions like "Why should I perform this action? During the game we sometimes felt that something was missing, even though the end of the game becomes very exciting! To end the game you must survive one round without being defeated by the other players. This makes you sit on the edge of your seat at times. Because, what can you do to stop your opponents? We can imagine that this makes for very funny moments during game nights.

If you're looking for a less complex game with nice artwork and cool miniatures in which you fight exciting battles with your opponent, then Goldenstar is definitely for you! Are you looking for a great deckbuilder with more depth? In that case we don't know if Goldenstar: the Galactic Tournament is the game for you. We are curious to see if there will be any changes made to the game that will provide improvements. As far as we are concerned, Goldenstar is certainly an entertaining game with potential. 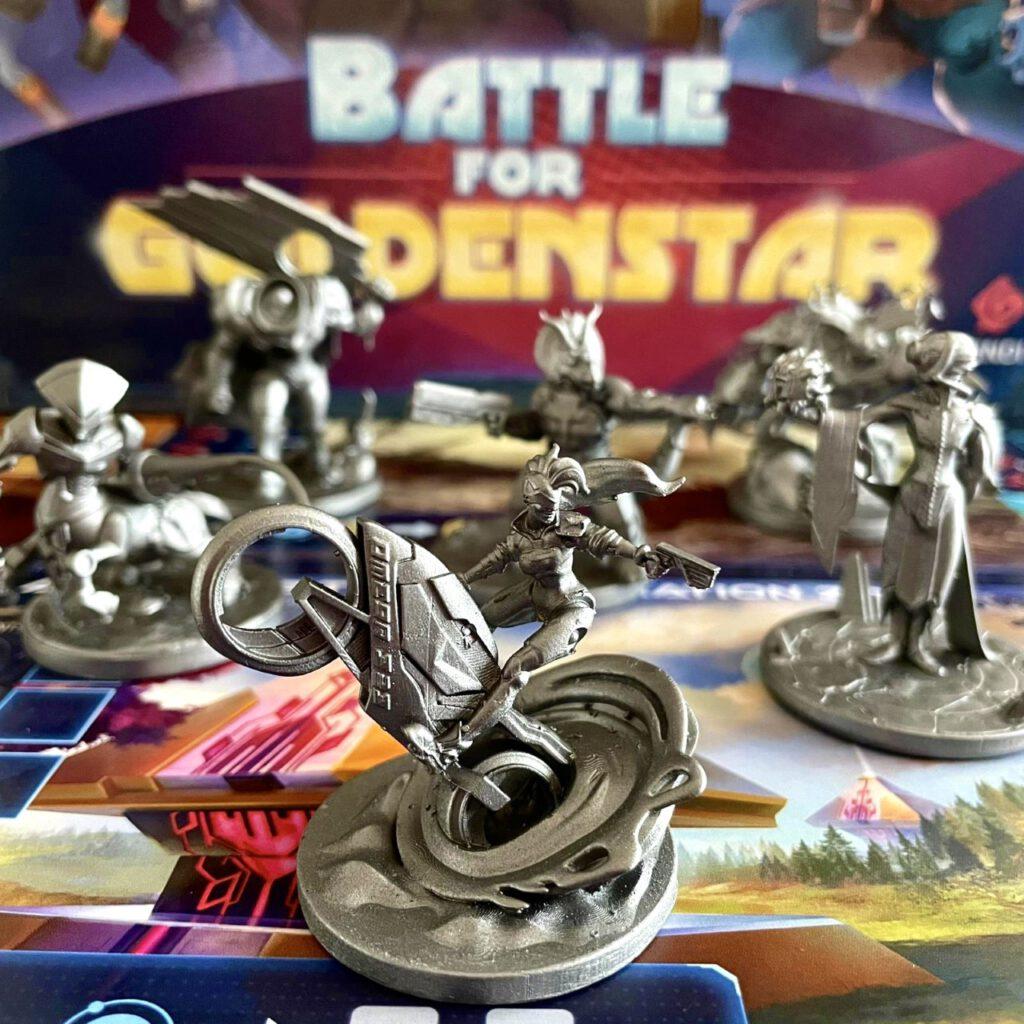 This game has been kindly gifted to us for preview purposes by Gindi Games. This preview was made using a prototype of the game. The final version may look different.