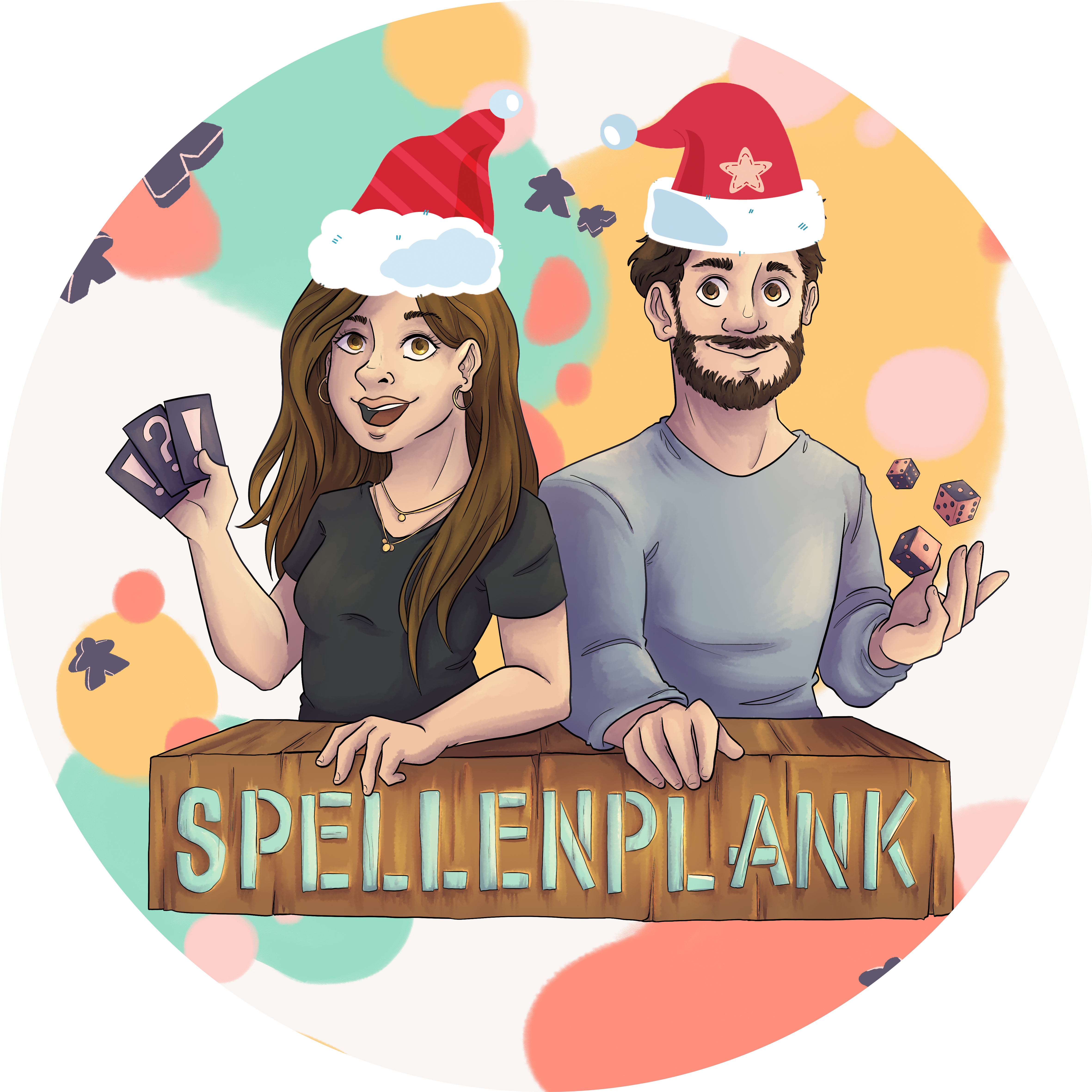 In a friendly competition, you are going to show the god of dreams, Morpheus, that you are the best DreamWeaver! 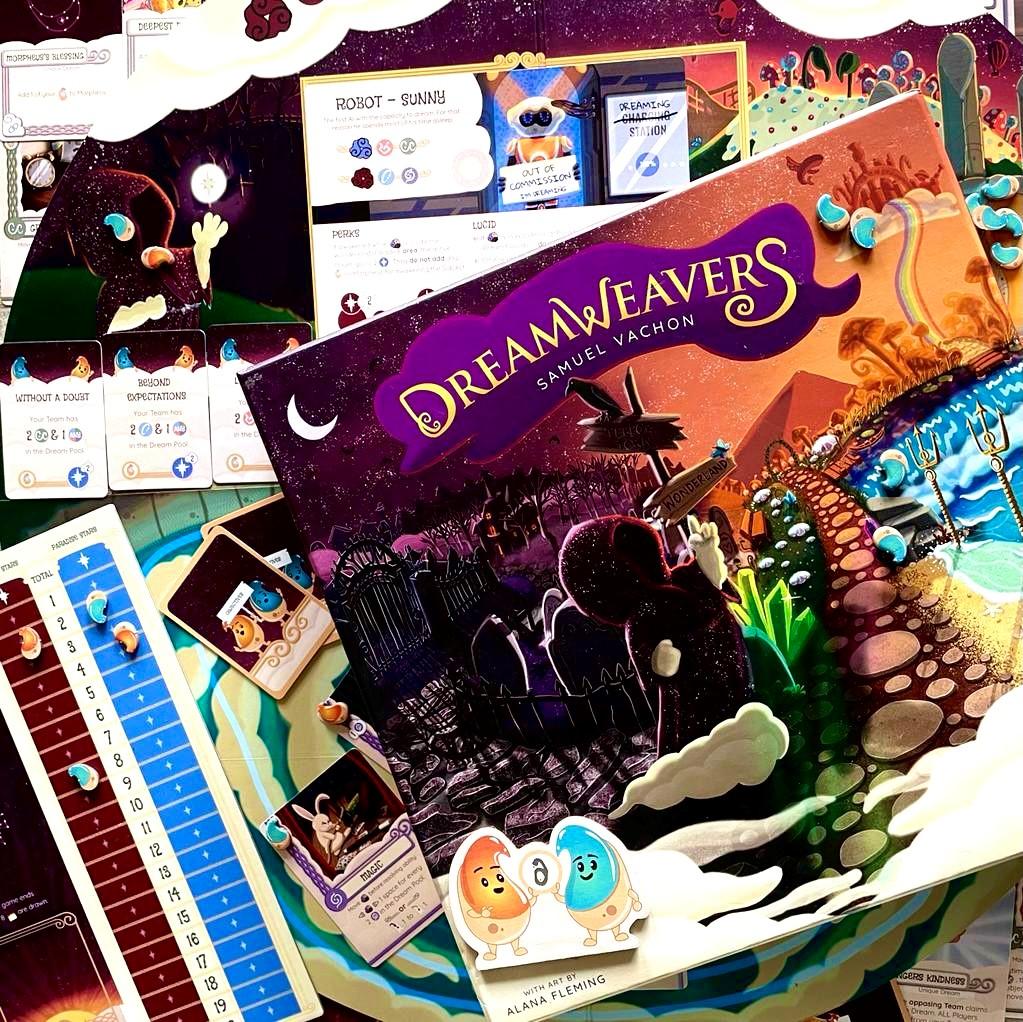 DreamWeavers is a team game in which you are going to gather as much paradise and nightmare stars as possible.

In DreamWeavers you are going to help Morpheus make dreams. You make these dreams by placing cards in the dream pool. You do need drops for this. All of these cards have a certain action that you may perform. Cards can not touch each other and must fall within the area, otherwise you can not place a card. In addition to playing a card, you can also perform other actions during your turn. For example, you can take cards or drops, complete a goal or claim a dream. If you claim a dream you get points depending on which cards you placed in the dream pool. You can get nightmare points or paradise points. After this you clear the dream pool and you can start making new dreams.

You always make dreams for certain characters who each have their own perks and dream preferences. When these characters wake up another one comes along, so the game is always changing. When you pick up cards, you may encounter dawn cards. If you encounter 8 or 10 dawn cards, depending on the number of players, the game ends immediately. The final score is then the lowest value of your paradise or nightmare track. So there is no point in just going for one of the two tracks! 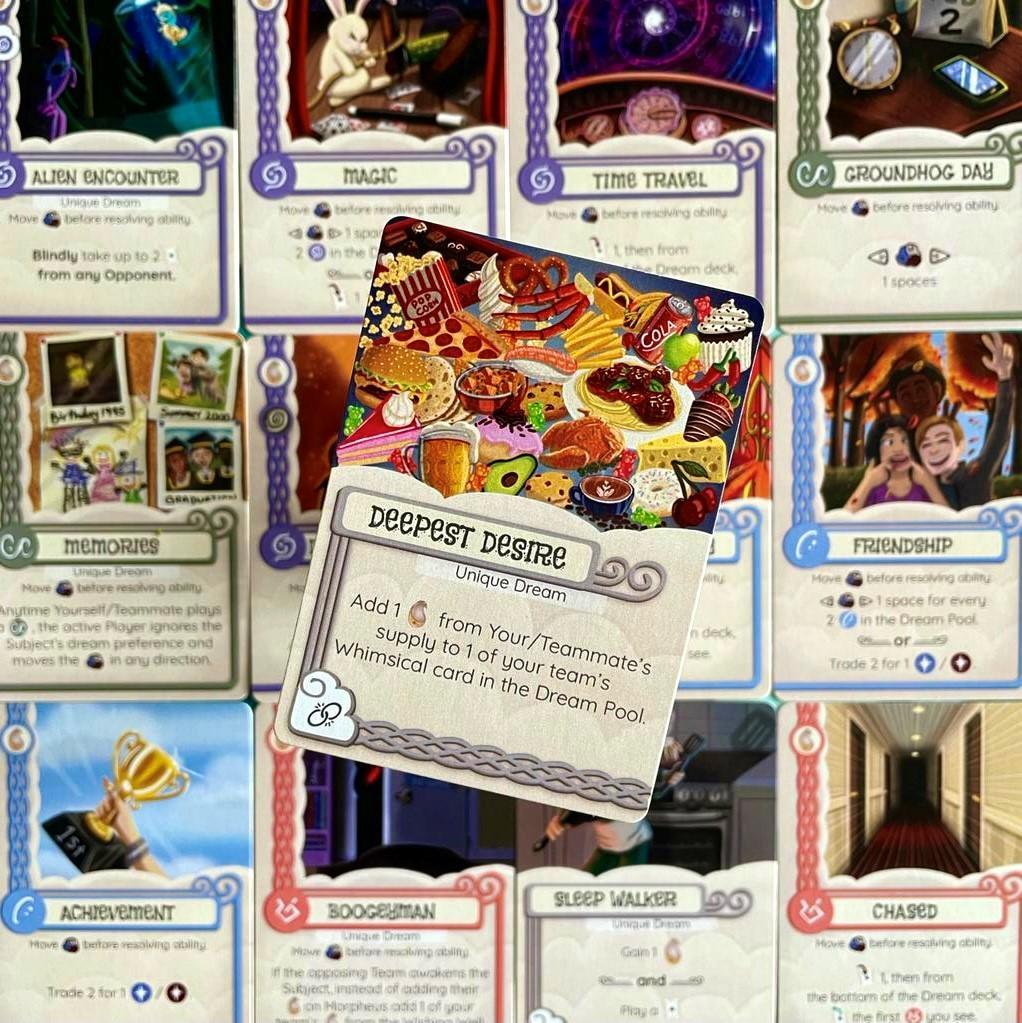 DreamWeavers is a game that we absolutely love. From the beginning, we were big fans of DreamWeavers. The fun theme and beautiful artwork won us over first, but the original gameplay added to it. We can't wait to see this Kickstarter come to life!

The game contains a great theme, but also a fun story! The game tells the story of the God of dreams, Morpheus. This story is easy to understand and this makes it extra fun to dive into the game. This was also immediately the first thing that appealed to us so much about DreamWeavers. The theme is cheerful, mysterious, colorful and interesting. Very diverse as far as we are concerned! This also applies to the nice artwork. From space aliens to cute dogs and cat ladies, you will see everything in DreamWeavers. We were allowed to review a prototype where not all the artwork was finished, but we are already very excited. That promises a lot! The artwork and components fit well with the theme and in our opinion it makes a nice whole. When you see DreamWeavers, you immediately feel like playing the game!

Fortunately, while playing DreamWeavers, we didn't get any less excited either. On the contrary! DreamWeavers is a team based game, which means that you normally play together with a teammate. We have only played DreamWeavers with 2 players so we missed that dynamic, but even then the game is still very fun. The game rules state that in DreamWeavers you engage in friendly competition and that's how it feels while playing the game. Especially fun for us when we play against each other, because we find it very difficult to interfere with each other. For us, the gameplay was incredibly fun! Besides the fact that it is great to be able to play all those beautiful cards, we also encountered surprising elements such as the use of the Dream Pool. The way you have to place your cards here and take into account the space almost feels like a small dexterity element. We are very curious to see how DreamWeavers plays with more players, but would also definitely recommend the game if you are playing with 2 players.

You might not expect it at first glance, but DreamWeavers contains a surprising amount of tactics and depth. The rules are simple, but winning DreamWeavers is still quite a challenge. You have to constantly monitor the status of the board, the moves of your opponent(s) and your own score. In DreamWeavers, you have to score on 2 levels. You want to collect as many stars as possible on the nightmare and paradise path. This means that throughout the game you constantly have to take both into account. This makes DreamWeavers very exciting.

Besides the fact that DreamWeavers looks great, the gameplay is very fun and the game contains enough surprising elements to dream away at. We can't wait to have the final version of DreamWeavers in our hands and are curious to see if you will like the game as much as we do!

- Better with more than 2 players

This game has been kindly gifted to us for preview purposes by Squanga Games. This preview was made using a prototype of the game. The final version may look different.