In Chai: Tea for 2, you compete as tea merchants to win the most victory points by filling ships and improving their tea plantation. 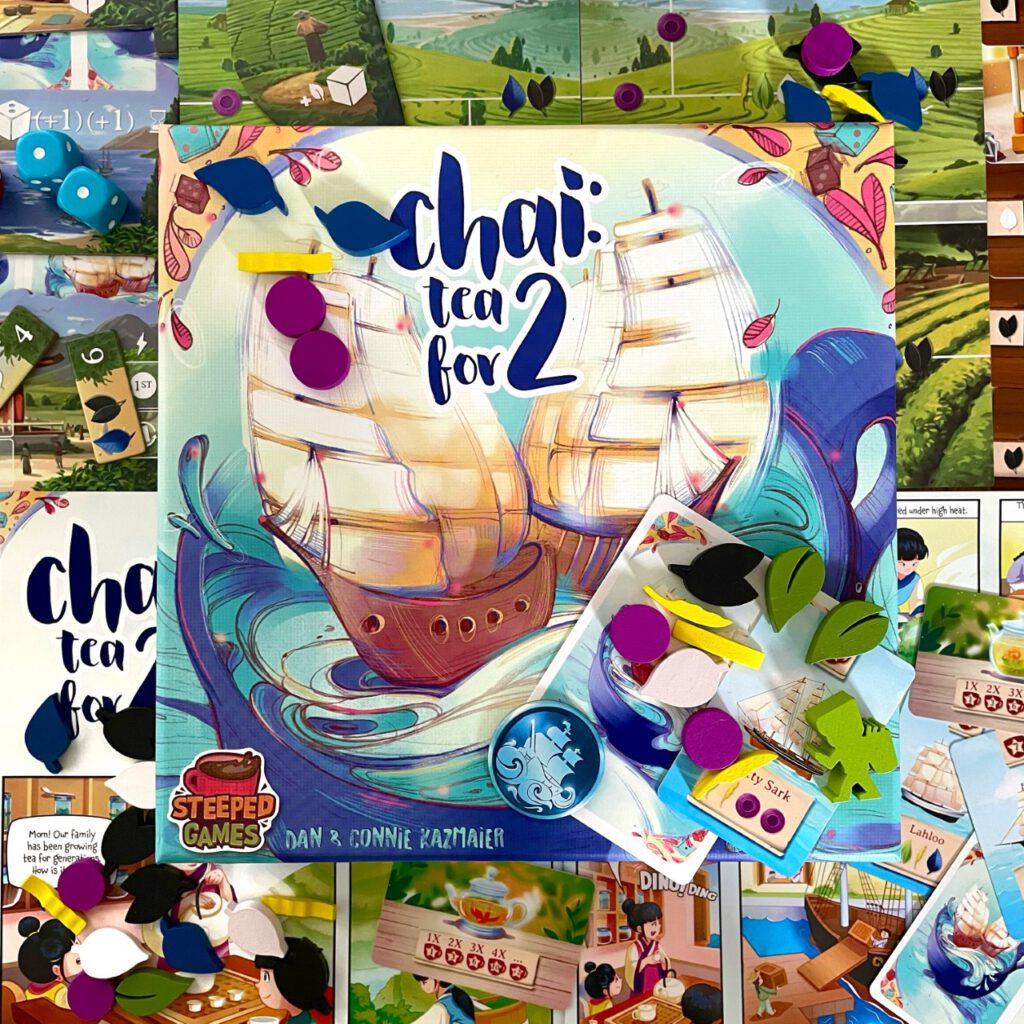 Chai: Tea for 2 is the new game from Steeped Games. This time it is specially made for 1-2 players. In Chai: Tea for 2, you get to work as a tea merchant. In this game you use dice as workers. With these workers you can collect tea cards and perform actions on the game board.

At the beginning of the game you determine your ship goal, this is the number of ships you need to fill to end the game. You can choose between 3, 4 or 5. A game with a ship goal of 3 takes about 25 minutes and a game with 5 takes about 45 minutes.

To get started, you first need to get things ready. Each player receives a tea plantation board, a tea merchant card and a set of dice (workers). Next, you place the 5 building boards on the table, they form the game board. The game board consists of 5 separate areas: harvest, market, palace, port and production. After assembling the game board, shuffle the 28 tea plantation cards. Place a plantation card in each square of the market. On the space next to the 6-eye die, place the remaining stack of cards. You do the same with the ship cards in the port section of the game board. Before you can begin, place the harvest tokens next to the harvest section on the side of the game board. Once everything, including the tea tokens is on the table, is set you're ready to begin! 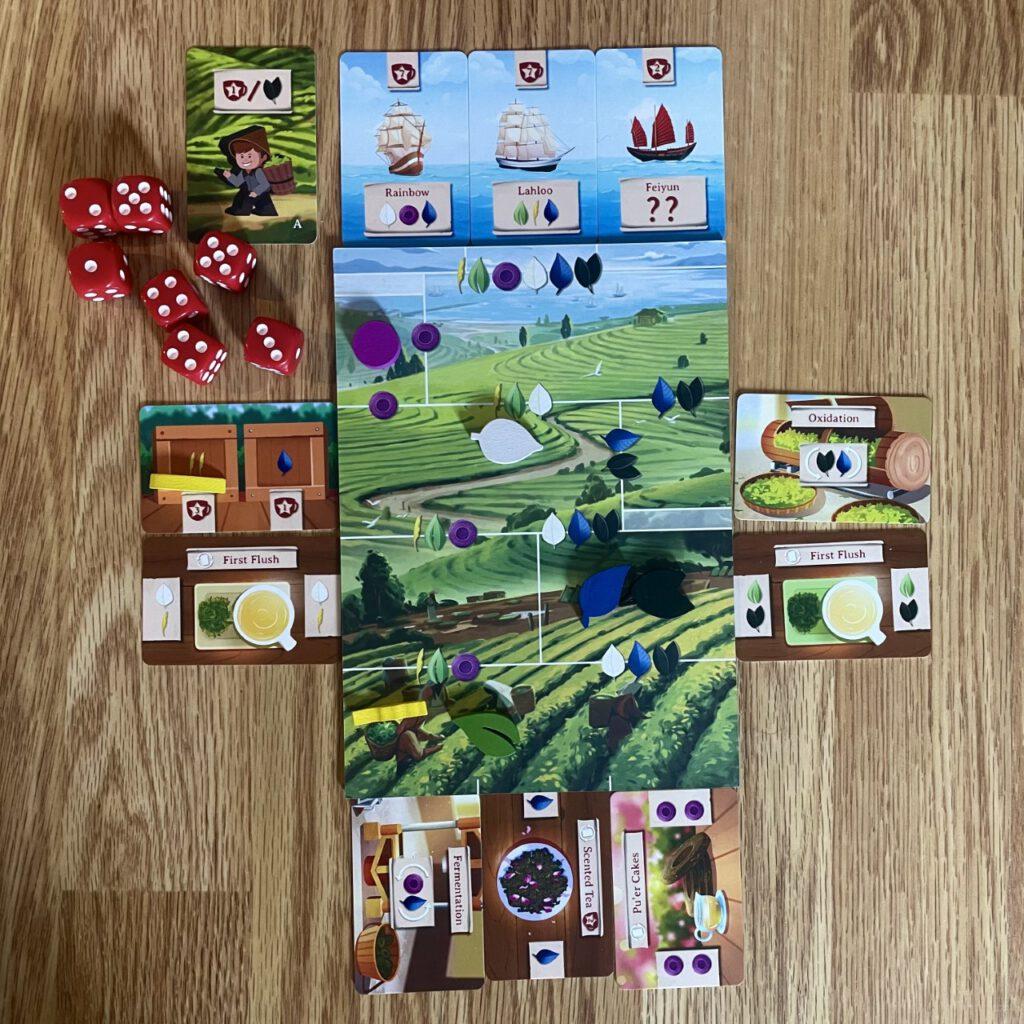 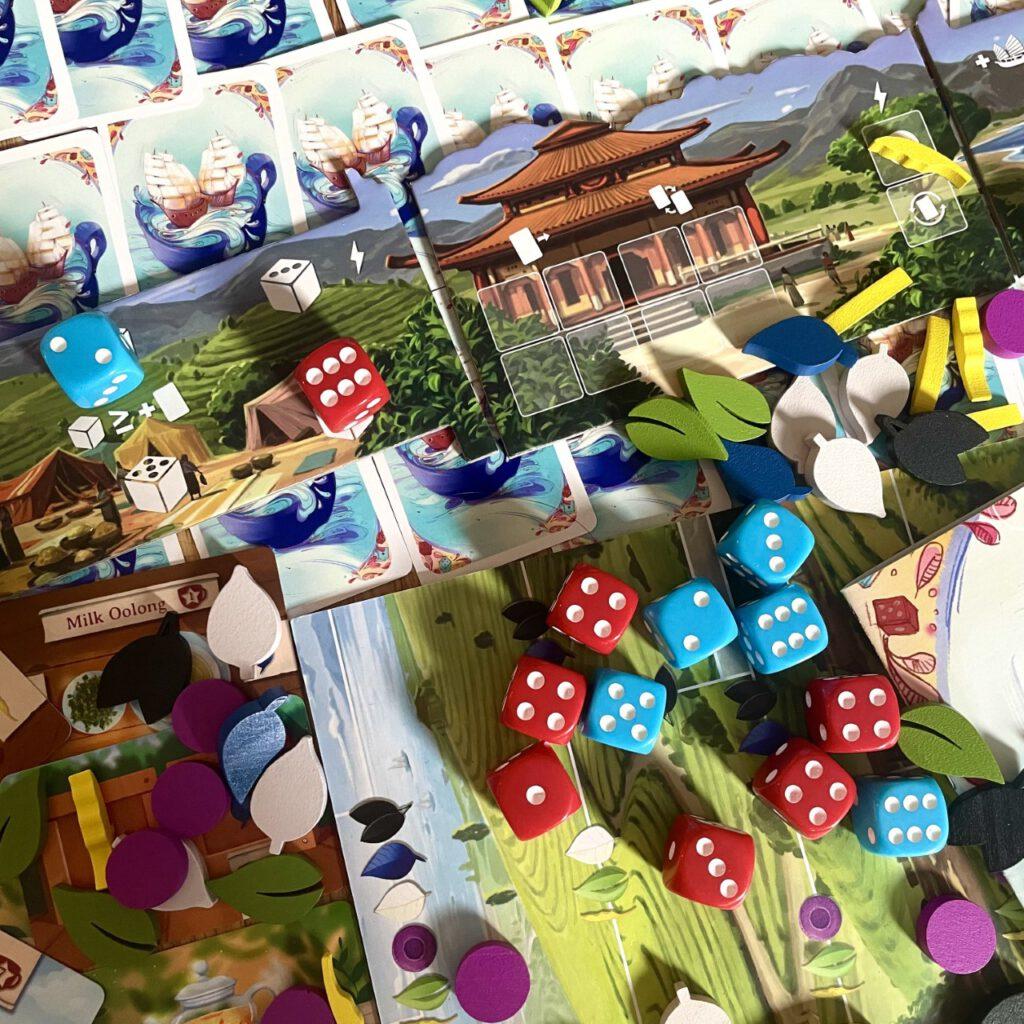 Tea for 2 is played in several rounds (years). The game ends at the end of the year in which a player has achieved shipgoal. So this is when a player has filled 3 to 5 ships. Each round you go through 4 steps:

At the start of each round, the starting player may move the tea assistant 1 to 3 clockwise steps forward on the harvest area of the game board. The starting player places the tea assistant on a harvest token of his choice. All players receive the 2 types of tea depicted on this token. The harvest tokens also have a number on them, this is the number of steps you may move your tea on your tea plantation board. You may also take an additional tea token instead of a step. If you have a harvest token with a number of 4 on it, you can choose to take 3 steps and 1 extra tea token. When each player has finished, turn over the harvest token and place it on the other side of the game board.

Players may place a worker of any value on the harvest board and take a tea token of their choice. This tea token is placed on the starting space of your tea plantation.

You may place a worker on any free space on the market board, provided it has the same value or higher than indicated. Then you may take the corresponding tea card and immediately place it on one of the free spaces around your tea plantation board. If placing a tea card allows you to perform an action, such as moving a tea token forward, you may do so immediately. All tea cards have different actions. For example, some tea cards allow you to move the tea token of a certain color (that is adjacent to the card) one extra step forward in the plantation. These tea cards allow you to process your tea faster in your plantation and thus transport it faster to the ships. There are also tea cards that only give you points at the end of the game.

On the palace area of the game board, you can use your workers to perform 4 different actions such as moving a tea card on your tea plantation board or taking the starting game token.

Players can place their workers on the port to try and bring in a ship of their choice. You can reserve a ship by placing two to four dice in ascending order, for example 2, 3 and 4. The other player may have a higher or longer row of dice and thus replace your dice. At the end of that year, the ship comes into your port and you can fill it. You fill the ship by moving tea tokens to the top square on your tea plantation board. If there is a ship here that can hold a tea token, you must put it in that ship. Ships are worth a lot of points and eventually end the game.

4. Preparing for the new year

When all workers are placed the year is over. Now it's time to activate some actions on the game board such as at the port and the market. If the shipgoal has not been achieved yet, then it is time for the next year! The market and port are replenished and both players get their dice back.

The game ends at the end of the year when one player has completed the shipgoal and filled 3 to 5 ships. Both players now add up all their points from the tea cards and ships. You also get 1 point per card showing the same type of tea as your tea merchant. The player with the most points, of course, wins the game! 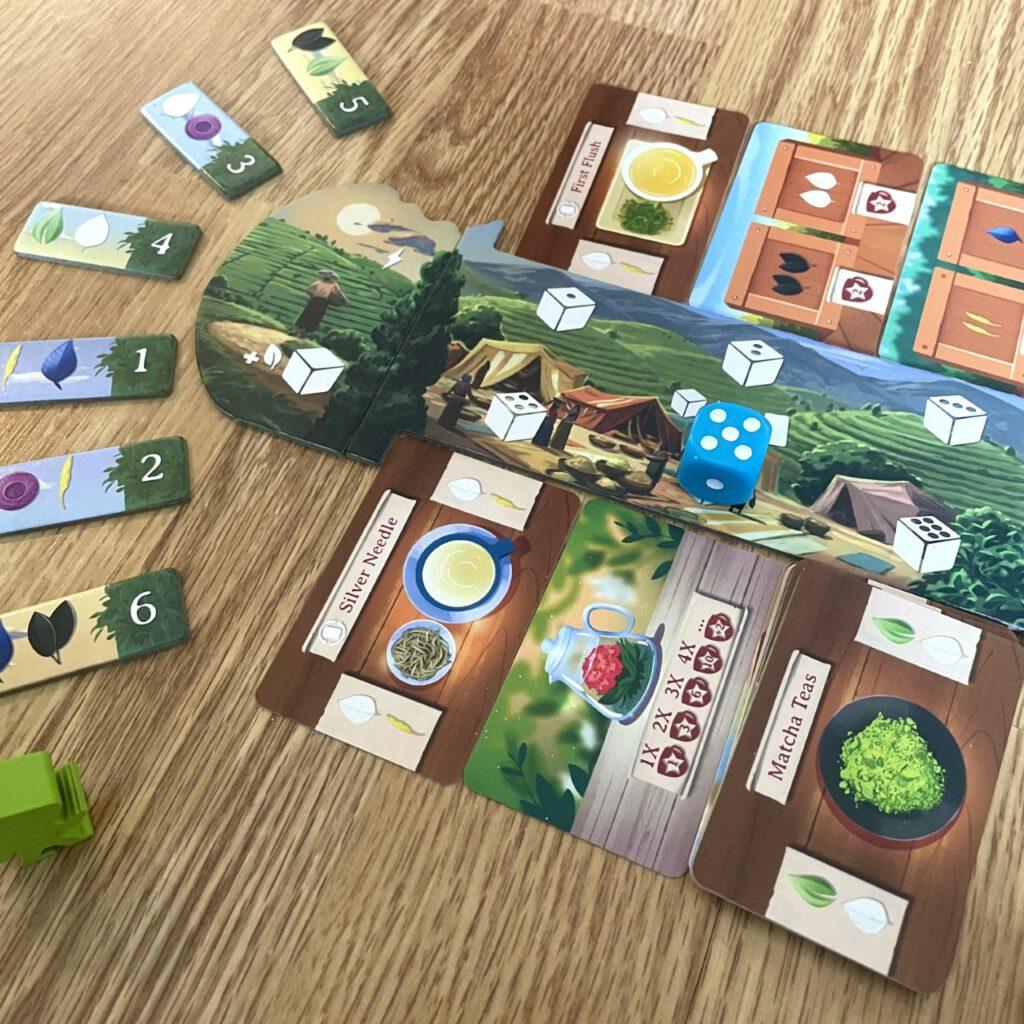 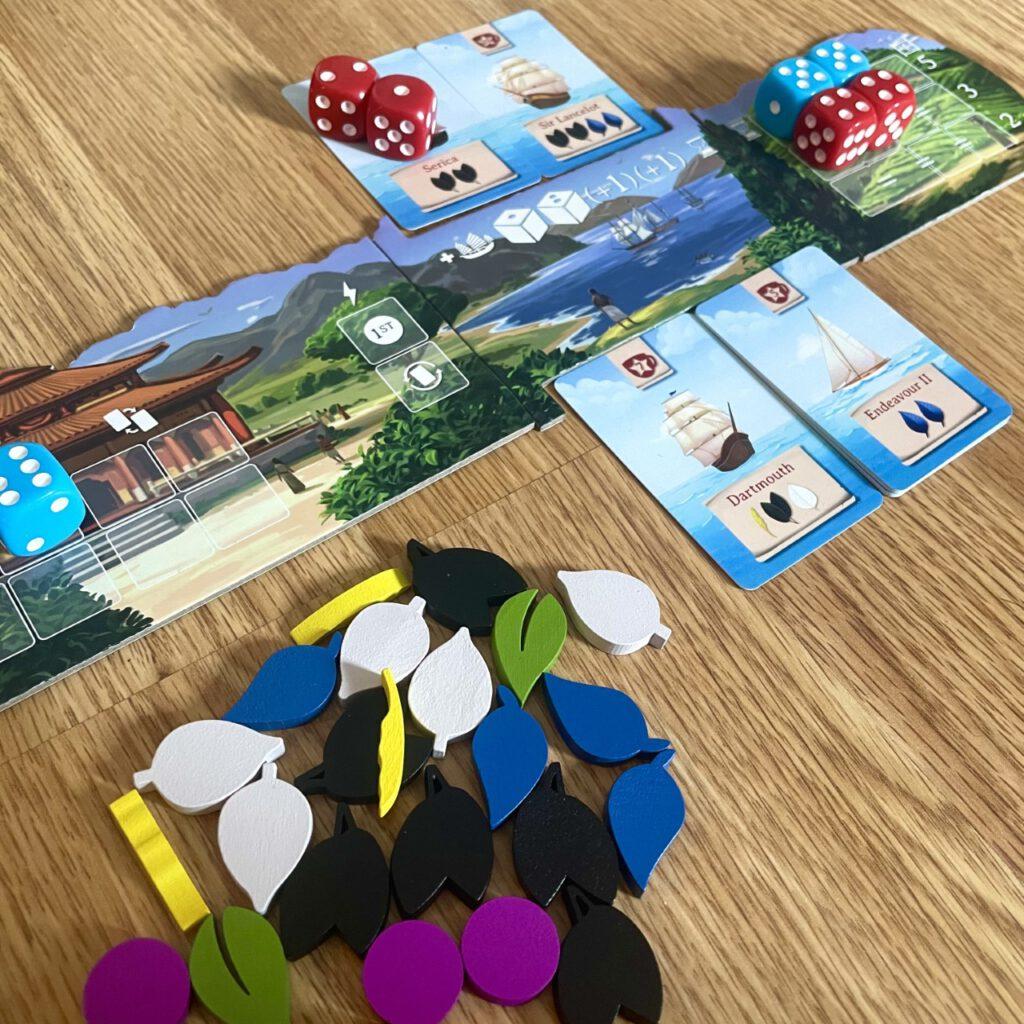 We are in love with the games from Steeped Games. The quality of all the components and the artwork is breathtaking. The art is even implemented in the game rules, where everything is depicted with comics. This game is once again wonderful to play and relax with, while enjoying a nice cup of tea.

We think that Chai: Tea for 2 offers a lot more depth than its predecessor. In Chai, we found the gameplay sometimes a bit simple, but that is definitely not the case with this game! There are a lot of actions you can perform and there are many different tactics you can use. For example, you can try to build the best possible engine at your tea plantation and score a lot of points with it. Or you can quickly go for filling ships and getting ahead of your opponent. It feels a lot more serious and competitive, while still keeping the relaxing feel of the art and components. So as far as we're concerned, this is a big plus!

It's also nice that you can decide the length of the game using the shipgoal. If you want to go for a longer game you can choose to have more ships to fill. Unfortunately, if you go for a shorter game you have less chance of getting a good combination of cards in your plantation and the game may end at its climax.

The market board is clear but it consists of loose pieces of board that are placed together. We would prefer that they would click together and were fixed to each other like that. However, this is obviously a preview and the final game can still change. 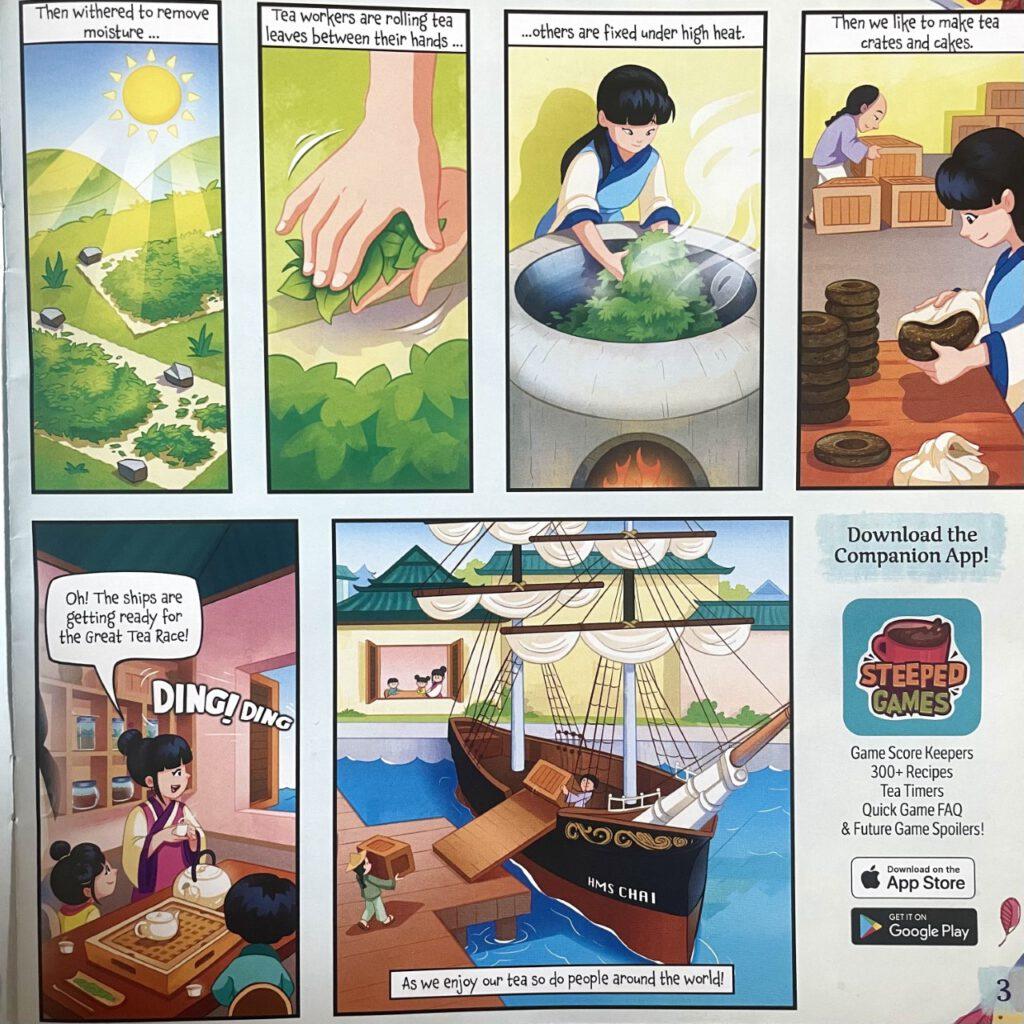 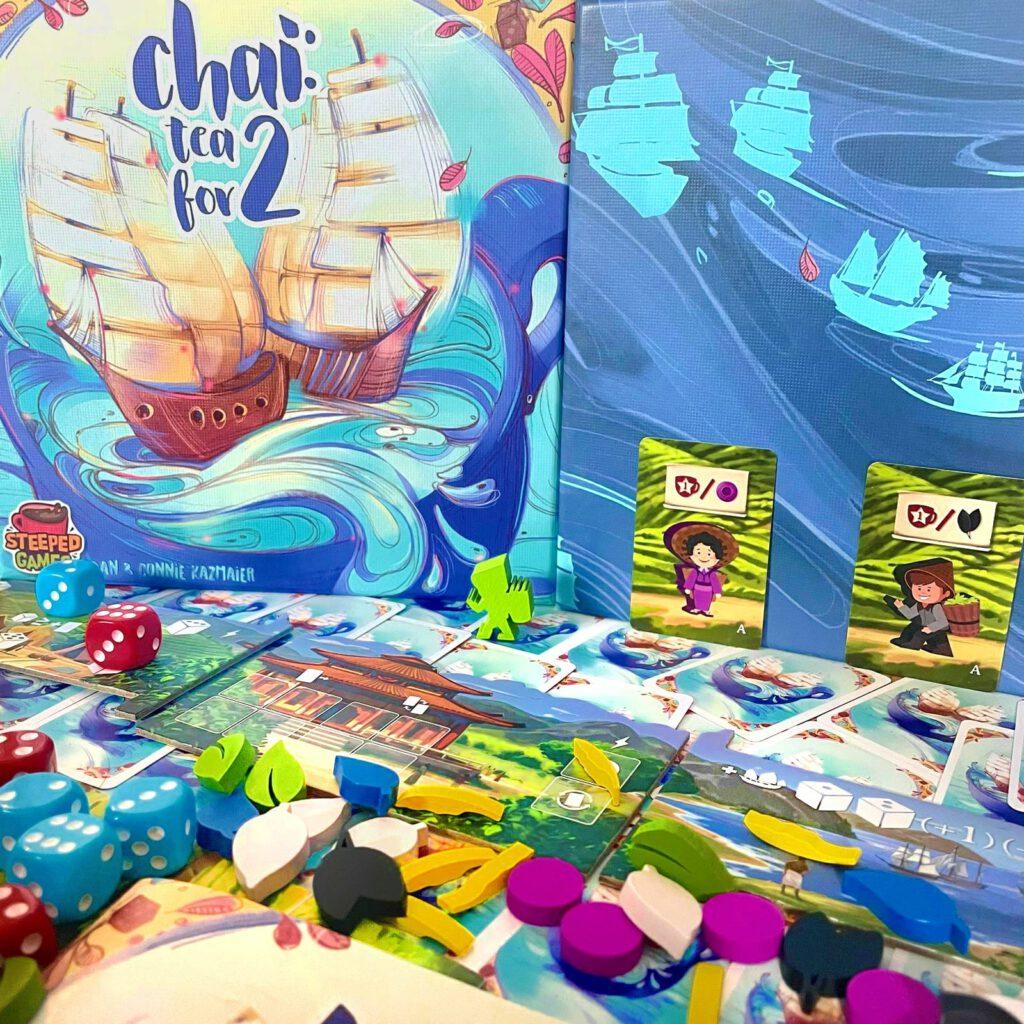 Chai: Tea for 2 is of course made for 2 people and plays best with 2. However, there is a solo mode available for you to play. There are also separate solo cards for this.

This game has been kindly gifted to us for review purposes by Steeped Games.